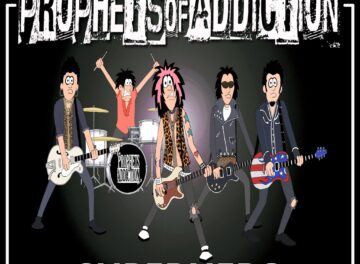 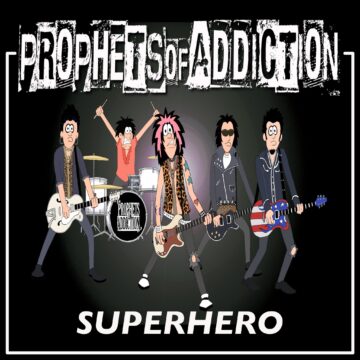 “The band enlisted the services of Lonny Paul Johnson to create the animated piece. “We felt an animated video captured the whole theme of the song and something I always wanted to do and this was the perfect fit,” states POA main man Lesli Sanders.

“Superhero” is the first single and video from the forthcoming, as yet untitled, Prophets of Addiction album. The band is currently in the midst of working on this new release with longtime producer Phil Soussan (bassist for Ozzy Osbourne, Beggars and Thieves, Billy Idol, Vince Neil, Rod Stewart and others) at Blue Cat Studios in Las Vegas, Nevada.

Prophets of Addiction‘s fourth album sees Sanders and company (guitarists G.G Sleaze, Tchad Drats, Terry Bratsch and drummer Wayne “The Stoke” Stokley going back towards the glam, punk and roots the band is most closely associated with. “I’ve always wanted to do a dark powerful acoustic record with a message and I think we achieved that with our last record. Now with a very strong lineup that is ready to move forward it’s time to get back to rocking,” remarks Sanders. The new release is expected to hit stores in the second quarter of 2023.

The “Superhero” single / video also marks Prophets of Addiction‘s signing with renowned Los Angeles based label Cleopatra Records to a seven year deal. When searching for a home for the new release we wanted a place that “gets it” and felt Brian and his label Cleopatra Records was the best place. He has always kept it “real” and is a fan of music and the scene.”