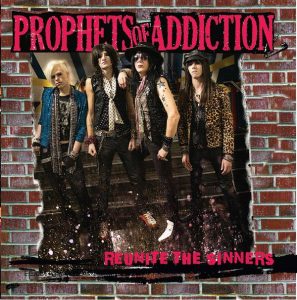 Sleaze rockers Prophets Of Addiction have released their new album Reunite The Sinners via Mighty Music worldwide except in Japan which is via Bickee Music. Of note, Poison guitarist C.C. DeVille is reported to be playing on the track “Kings And Queens” from the new album.

Amazon.com promotes the album as follows:

“Every once in a great and blessed while, a band comes along that encapsulates everything that s great about rock-n-roll. The Prophets of Addiction is that band. These guys are so authentic and such masters at what they do that it s like some mad scientist extracted the pure essence from their genre Guns N Roses, The Ramones, Hanoi Rocks, New York Dolls, Dead Boys, Backyard Babies, Lords of the New Church, Motley Crue and all the best glam/punk bands and gave rise to The Prophets of Addiction. With songs that will play in your head long after the album stops and looks that kill, The Prophets of Addiction are the total package. It s been way too long for a band like POA to come to us lovers of metal, mascara and musical mayhem. 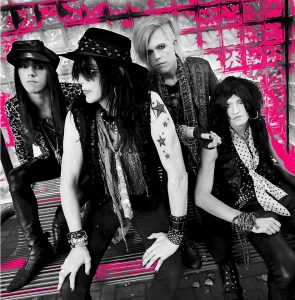 The Prophets Of Addiction is the brain child of Lesli Sanders formerly of Pretty Boy Floyd, as well as touring bassist for Marky Ramone and Phil Lewis (LA Guns). While Sanders handles lead vocals and bass guitar, joining him in Prophets of Addiction are Jimmy Mess on drums, Brandon Barger and G.G. on guitars. The Prophets of Addiction are back with a new album entitled: Reunite the Sinners to be released worldwide by Mighty Music (ex. Japan / Bickee Music) on the 15th of April 2016. Phil Soussan (Ozzy, Billy Idol, etc) a long time collaborator on Sander‘s works returns to handle the mixing and mastering duties. This time Lesli‘s old friend the legendary Poison guitarist C.C. DeVille literally lends a hand with a guest guitar solo on the track “Kings and Queens.” The band has successfully toured Europe, Australia, and the USA performing hundreds of shows a year. With the release of Reunite the Sinners in the spring of 2016 and many tour dates in the works including the massive Rocklahoma festival there are no plans to stop any time soon.”

The Prophets Of Addiction are scheduled to embark on a comprehensive tour of the United States in 2016.