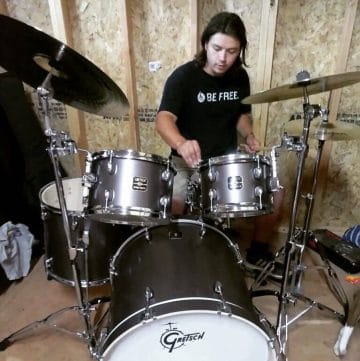 The line-up changes continue for North Carolina, USA based rockers   who still have guitarist Scott Roby, bassist Kenny Keeler and lead vocalist Dalton Bowes from the original line-up that started back in March 2016. Pröwess have now revealed that their new drummer is Brandon Chinn who replaces Hunter Floyd who took Adam Ellis‘ spot in the fall of 2017. The second guitarist spot has also undergone a few changes since March 2016 as current guitarist Brian “Curly” Staples replaced Adam Morris in the fall of 2018. Morris replaced original band member Kip Wilson in the fall of 2017.

“Good morning! We’d like to take this time to officially welcome Brandon Chinn as our new drummer! His favorite player is John Bonham, but Brandon is also an accomplished guitarist and guitar instructor! He loves Jimi, SRV and old blues, and we are pumped to start writing some new tunes with this dude! In fact two brand new songs have come together very quickly! We’ve been working hard over the past weeks to get ready for our upcoming tour and we can’t wait to show you what we got in store for ya’. Give Brandon a big welcome from the Pröwess Tribe! ✊?❤️❤️❤️”

Featuring special guest Chris Wolfgang Heffernan [Gunpowder Gray /ATL] on guitar. ‘Bring Your Love’ is the first studio single from the upcoming full-length debut album from Pröwess, due early 2019. The song was produced by Tuk Smith [BITERS] with Dan Dixon as sound engineer.