Drummer Adam Ellis will be leaving the hard rockers Pröwess, who are based in Charlotte, North Carolina, USA, to move to Denver, Colorado, USA. 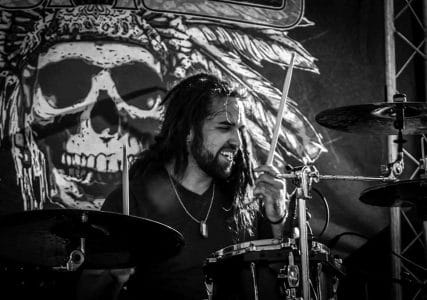 ‘As we return from the road, we have an announcement for our fans. Our home-coming show this Saturday in Raleigh at The Maywood will be a bittersweet affair, as it will be our drummer Adam Ellis‘ final show as a member of Pröwess. It seems Adam found his heart in Denver and thus has decided to move there to start a new life. We completely understand, and we’re genuinely happy for him and we all wish him well in his new adventure! Come out to the Maywood this Saturday and show him some love and help us send him off in style! His plane departs on Monday morning! We’ve got some friends filling in on upcoming shows so stay tuned for more about that! Here’s raising one final toast to our brother!’

Ellis played on Pröwess‘ debut EP Headfirst and that group’s previous incarnation 21st Century Goliath which released two albums — Radio Destroyer (2012) and Back With A Vengeance (2014).

21st Century Goliath‘s “Back With A Vengeance” video: