Great news for Angel fans as guitarist Punky Meadows and lead vocalist Frank Dimino have reformed the band and will be recording a new album. The Angel band members will be dressed all in white like they used to do. The other band members for the reformed Angel are Danny Farrow on rhythm guitar, Charlie Calv on keyboards, Steve Ojane on bass and Billy Orrico on drums. The foursome were the backing band for Meadows and Dimino while the duo toured last year. 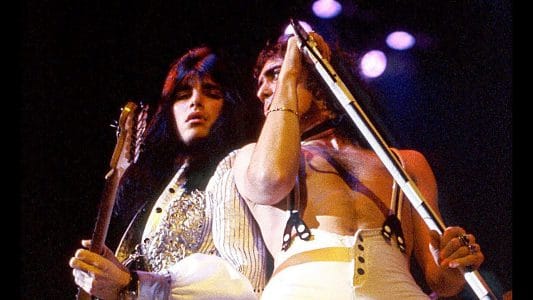 HAPPY NEW YEAR! We have some Exciting news to share…

Having our own solo projects and performing on each other’s records led to a natural progression to assemble the side project, “Punky Meadows & Frank DiMino of Angel”. This led to a very successful 2018 Tour. The great chemistry we experienced has led us to our next journey of writing and performing together and to enter the New Year as “ANGEL“ featuring Punky Meadows and Frank DiMino.

We will be recording a brand new album and begin touring April, 2019. We are very Excited to announce that “STARZ” will be joining us for many shows!!!

Looking forward to Rocking with all of you in 2019!

Wikipedia states the following in part about Angel (with slight edits): “Angel was discovered by Kiss bass player Gene Simmons performing at a nightclub and was eventually signed to the same label as Kiss, Casablanca.

Angel‘s image of dressing in all white was a deliberate contrast to Kiss, which wore black. Angel sported an androgynous image and elaborate stage sets. They were slammed by rock critics, and Frank Zappa ridiculed the all-male band’s feminine appearance in the song “Punky’s Whips”. Angel never achieved mass commercial success but acquired a following as a cult band.”