Chilean rockers QueenMilk have released a teaser for their upcoming video for their song “Sweet Love.”

QueenMilk‘s Biography on their website states (with slight edits): 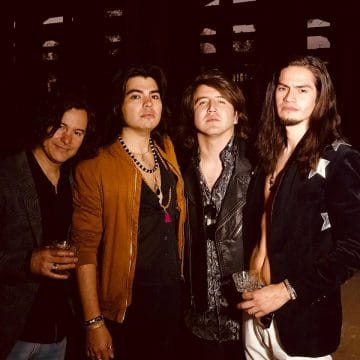 “QueenMilk was born in early 2015 in Santiago, Chile. Formed by two childhood friends, two brothers and a secret weapon. They used to live at the same street called “El Descanso” in Maipú, Chile (just a few blocks away) but they didn’t met each other until 20 years later, when Rod (guitar) was looking for musicians to begin a protect.

Mauro (bass) and Rod met for serendipity at a record store in Santiago, and started talking about music. Soon they realized that they where long time neighbours.

In mid 2015, Sebastián Blau (QM‘s first vocalist) had to leave the band, and Samu (vocalist, and Rod’s childhood friend) was the one to complete QM’s formation.

QM has been invited to play at numerous gigs in Chile, Brazil and recently the US, where they did a 13-dates tour across California, playing in world renowned venues such as Whisky A Go Go, Rainbow Bar, Hard Rock Cafe (SF), Canyon Club, and The Viper Room. They are well known for the energy that they put on stage along with the preoccupation they put on their sound, which seeks the magic of the vintage and classic rock. The band is formed by Samu (vocals), Rod (guitar), Mauro (bass), Nacho (drums) and Suricato (percussions / secret weapon) and are currently working on their second studio album. You can listen to “El Descanso”, QM’s debut album, in iTunes and Spotify. Thanks for visiting ? we’ll see u soon.