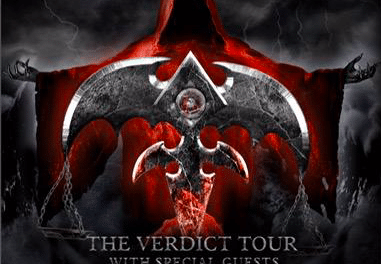 The following message was posted in part on Queensrÿche‘s Facebook page earlier today (with slight edits): 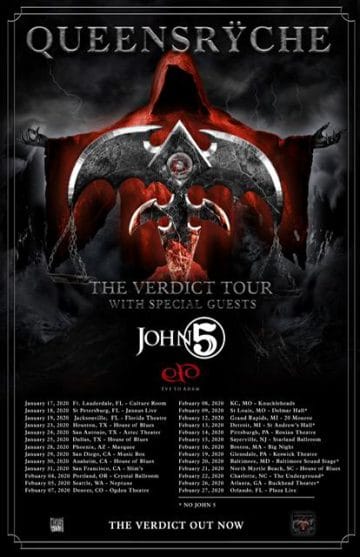 “(Bellevue, Washington – September 23, 2019) – Rock icons Queensrÿche are proud to announce “The Verdict” 2020 Headline Tour today! The band will be joined by special guests John 5 and Eve To Adam starting on January 17th in Ft. Lauderdale, Florida and wrapping up on February 27th in Orlando, Florida. For more information on upcoming tour dates and to purchase tickets, or VIP packages, please visit our website tour page here: http://www.queensrycheofficial.com/tour-dates

“Hey Rychers, we are hitting the road in January 2020 with John 5 and Eve To Adam! Come see this entertaining extravaganza in your city!” states Michael “Whip” Wilton about their upcoming U.S. tour.

Before hitting the road for their 2020 U.S. Headline Tour, Queensrÿche will be in Europe for a handful of headlining dates with their special guests Firewind.

All upcoming tour dates are listed below.

Purchase and stream The Verdict here:

Sleaze Roxx stated the following in its review of Queensrÿche‘s set at the inaugural Slam Fest in Kitchener, Ontario, Canada on July 6, 2019: “With the band’s last three albums that have all featured Todd La Torre, Queensrÿche have made a conscious effort to rekindle that relationship with their fan-base. They have brought forth a sound of old that many are really gravitating towards. I myself commend the band for doing so and feel that a lot of the material on those three albums is stellar, but with that said, in a concert setting, I prefer to hear the popular material. Possibly it’s because they followed Great White and Skid Row. With those two bands playing so many hits, it created a certain expectation. Somehow, Queensrÿche missed that mark, but they are entitled to play whatever they want and I feel had it been solely a Queensrÿche show, I would have been a little more receptive to what they had to offer.”