Queensrÿche release video for new single “Behind The Walls”

Queensrÿche consisting of frontman Todd La Torre, guitarists Michael Wilton and Mike Stone, bassist Eddie Jackson and drummer Casey Grillo have unveiled a video for their second single “Forest” from their upcoming studio album Digital Noise Alliance, which will be available via Century Media on October 7, 2022. 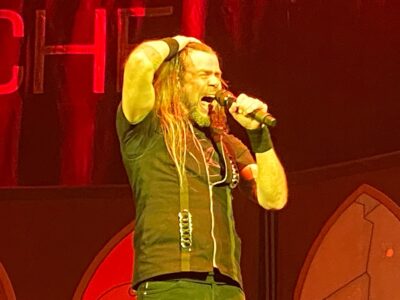 Sleaze Roxx stated the following in its review of Queensrÿche‘s previous studio album The Verdict: “…we also realize that Queensrÿche haven’t abandoned their political and social commentary. It’s not too difficult to interpret The Verdict as a reading of America’s current political turmoil. Queensrÿche have — probably wisely — left the lyrics open and abstract enough that one can argue that The Verdict is about any number of people, situations, eras, and places. My interpretation is that The Verdict calls into question America’s current administration, but the ambiguity of the lyrics — we don’t hear any mention of particular names, for example — allows Queensrÿche to speak about serious topics without alienating or offending any particular segment of their fan base. Queensrÿche provoke thought without controlling it.”

Queensrÿche‘s “Behind The Walls” video: