Queensrÿche have released yet another video in support of their critically acclaimed latest studio album Condition Hüman, which was released back on October 2, 2015. This time, Queensrÿche have unveiled a video for the song “Bulletproof.” 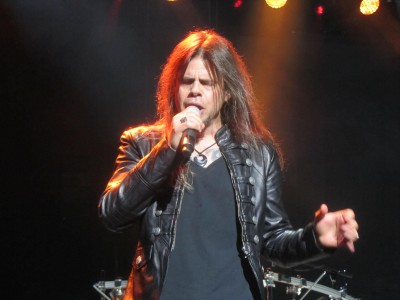 The following message was posted in part on Queensrÿche‘s Facebook page earlier today:

Having just completed their year-long Condition Human world tour, heavy metal icons QUEENSRYCHE are proud to release a new music video for their song “Bulletproof”. Speaking about the story behind the track as well as the new video, vocalist Todd La Torre comments: “Bulletproof is a journey through a relationship gone bad, however painful the relationship is you still find a way to persevere. We elected to present the song in a live setting as a sharp contrast to the videos we’ve done for the “Condition Human” album to help bring this chapter to a close and start the next journey.”

Sleaze Roxx stated the following in its review of Condition Hüman, which included a comment on the track “Bulletproof”: Condition Hüman starts off with a bang with two standout tracks — “Arrow Of Time” and “Guardian” — that are heavy while still melodic and where [Todd] La Torre‘s vocal range simply shines. Ironically, La Torre sounds like [Geoff] Tate did during those great Queensrÿche records from now almost three decades ago. The music with the guitars and melodies on those first two tracks also takes me back to Queensrÿche‘s glory days. Other standout tracks include the gorgeous ballad “Bulletproof” (likely the group’s best ballad since “Silent Lucidity”), the haunting and vintage sounding “Toxic Remedy” and the faster paced “All There Was.”