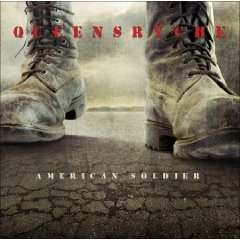 Queensryche envisions war through the eyes of a soldier with the band’s twelfth studio release, the epic concept album AMERICAN SOLDIER. The ambitious album encompasses a dozen songs inspired by numerous interviews with veterans conducted by Geoff Tate, the group’s singer and chief songwriter, who was intent on telling their story using their words. After speaking with soldiers who served in various conflicts–from World War II to Iraq–Tate turned their firsthand experiences from the frontlines into an unflinching musical examination of the life of a soldier and the consequences of war. AMERICAN SOLDIER will be available from Atco/Rhino on March 31 for a suggested list price of $18.98 (CD) and $9.99 (digital).

Tate, Michael Wilton (guitar), Ed Jackson (bass) and Scott Rockenfield (drums) recorded the album in 2008 over the course of nine months. The idea for AMERICAN SOLDIER, Tate says, came from hearing stories from fans that are veterans, as well as his own father, who served in both Korea and Vietnam . “My father was a career military man, but until very recently he never spoke about what he went through. I think that reticence is true of a lot of veterans, which means most people never truly understand what it means to be a soldier at war. Hearing what he and some of our fans have endured made me want to share their stories with the world. This is an album about the soldiers, for the soldiers, as told by the soldiers themselves.”

Those stories resonate at the heart of AMERICAN SOLDIER, imbuing each song with vivid details about both the emotional and physical impacts of war, evoking war zone battles (“Middle Of Hell”), sacrifice (“The Killer”), loss (“If I Were King”), the longing for home (“Remember Me”), and adjusting to society after returning from war (“Man Down!”).

Tate recorded many of his interviews with the soldiers, and some dialogue from these discussions is mixed into several of tracks, allowing the soldiers’ own words to help tell their compelling stories. The band also brought a few of the soldiers into the studio with them to record vocals. The verses of the track “Unafraid” feature the voices of Chris Devine, a Vietnam veteran, and Sean Lenahan, a veteran of Somalia , recalling their war experiences while Tate provides the anthemic chorus. Also making a guest vocal appearance is Tate’s 10-year-old daughter Emily on the gripping duet “Home Again,” which examines the emotional toll of war from two perspectives, with Geoff singing from the soldier’s point of view and his daughter singing from the viewpoint of the child left behind.

Making the album, Tate says, was an enlightening process. “I was surprised to learn how little has changed through the generations. I spoke with a Vietnam vet whose experience wasn’t all that different from a soldier who fought in Somalia almost 30 years later. But what surprised me the most was how antiwar most soldiers are. To me, that makes their sacrifices even more moving.”

Soon after the release of AMERICAN SOLDIER, Queensryche will launch an extensive spring tour of the U.S., with international dates to follow later in 2009. The shows will be presented in three suites, with the band performing sets from AMERICAN SOLDIER, Rage For Order, and Empire. The first date of the tour will be April 16 at Snoqualmie Casino in the band’s hometown of Seattle .

Courtesy of www.sleazeroxx.com and 1888media.com