Queensrÿche frontman Todd La Torre was recently interviewed by Jimmy Kay and Alan Dixon for The Metal Voice. La Torre was promoting his debut solo album Rejoice In The Suffering, which will be released via Rat Pak Records on February 5, 2021. 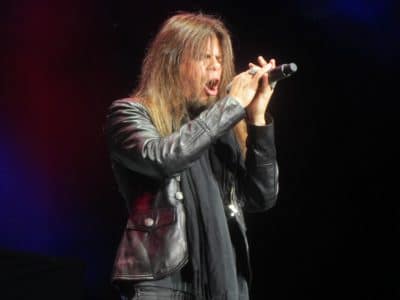 Queensrÿche‘s last studio album The Verdict was released back via Century Media Records on March 1, 2019. It finished at #15 on the Sleaze Roxx Readers’ Top 20 Albums of 2019.

On whether Queensrÿche are working on new material for an upcoming studio album, La Torre indicated (as transcribed by The Metal Voice with sight edits): “Yes, [guitarist] Michael [Wilton] flew down recently a week or two ago and Zeuss [producer Chris “Zeuss” Harris] came down we recorded 14-15 new song ideas and Michael will be coming back in a month or so. So yes we are writing new Queensrÿche stuff and Zeuss is recording it in real time as we are in a room coming up with fresh ideas on the fly.”

In terms of whether Queensrÿche would consider doing a live album, La Torre stated: “We have tons of multi track recordings from two years of live shows and I told [bassist] Eddie [Jackson] I think Michael has the hard drives why don’t we send hard drives to each of us and we can pick three songs. Each guy picks three songs and maybe we can assemble 15 songs for a live record. That is something we are talking about, we shall see.”

You can read other excerpts from the interview with Todd La Torre at The Metal Voice‘s website and/or listen to the interview below: