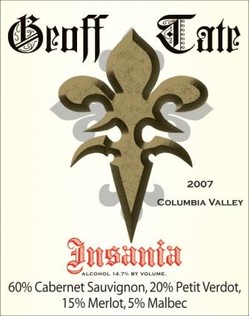 Hot on the barrels of his sold out “Insania” red wine signature blend, Queensryche front man Geoff Tate has announced a new collaboration with Walla Walla, Washington-based Three Rivers Winery (www.threeriverswinery.com) for a white wine blend of the same name.

The new “Insania” — an artfully balanced offering that shines with honeydew melon, pear and apricot — is a classic blend of Sauvignon Blanc (78%) and Semllion (22%) that will be available early next year for an anticipated price of $25 per bottle.

The initial tasting and launch of the new blend will take place at the Snoqualmie Casino in Snoqualmie, Washington on Thursday, February 4th and Friday, February 5th, 2010 in conjunction with Queensryche’s forthcoming performances of the highly anticipated “Queensryche Cabaret.” (heralded as “The First Adults Only Rock Show!”).

Crisp and lively, the finish of the “Insania” white lends itself to an encore performance with its bright, crisp acidity, leaving you wanting more…

“Insania” (a Latin word meaning insanity, irrationality, madness) has become a labor of love for Geoff Tate, who remains deeply involved with its development and looks forward to further collaborations with Three Rivers Winery in the future.

“Wine has been an important part of my life and the creation of Insania is yet another avenue to express my creativity and give my fans something more they can enjoy,” states Geoff. “I hope to keep producing wine as long as I enjoy drinking it… and that’s likely going to be for a very long time. May everyone enjoy this new white blend.”

“Insania” is certainly off to a good start as Geoff and his red wine signature blend were prominently featured in the March 31, 2009 issue of Wine Spectator (online version available at http://www.winespectator.com/webfeature/show/id/Wine-Talk-Geoff-Tate_4436).

Cheers to “Insania” for years to come!