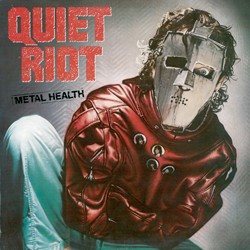 For a while there, back in 1983/84, Quiet Riot were arguably the biggest band in the world. Not something many music critics like to acknowledge, but the fact is they spearheaded the wave of Los Angeles rock and metal acts which would change the face of music on both a national and international level. They were actually the frontrunners in a movement which would transform theAmerican charts from new wave to metal, and sway the rock pendulum away from British heavy metal to American hair metal — yes, an insulting term maybe, but a convenient label to characterise all that was to follow.

It’s easy to sit back now and feel that they made it on the back of covering a riotous (sic) Slade track — “Come On Feel The Noise” — but with royalty cheques in hand Noddy Holder and Jim Lea were surely not complaining, and neither were the millions of people who bought the ‘Metal Health’ album. And at the last count there were over six million of them!

Let’s not forget also that guitarist extraordinaire Randy Rhoads was once a member of the band before taking up a position in Ozzy Osbourne’s Blizzard Of Oz, blazing a trail for Carlos Cavazo, Frankie Banali, Rudy Sarzo and outrageous frontman Kevin DuBrow to muscle their way to gold and platinum. Originally issued in 1983, ‘Metal Health’ is a classic slice of American metal and comes complete with 5 bonus tracks, enhanced artwork and additional unseen photos spread out over a 20 page full colour booklet.

Quiet Riot’S second album, ‘Condition Critical’, sold a huge amount of copies (in fact at the time over two million!), but, looked at from a broader perspective, it seemed to mark a significant disappointment, especially after they had turned the music scene on its head by exploding out of Los Angeles with their six million selling ‘Metal Health’ album. In addition, those statistic hides the fact that ‘Condition Critical’ is generally regarded as a much stronger work, with a reputation that has continued to grow exponentially amongst critics and fans alike.

In addition frontman Kevin DuBrow was becoming an increasing liability, constantly berating and chastising fellow musicians from the LA scene, accusing them of riding on Quiet Riot’s coat tails. Issued in July 1984, the album contained yet another Slade cover, “Mama Weer All Crazee Now” but also contained well written self penned material, with the title track being a stand out composition, truly defining the Quiet Riot sound.