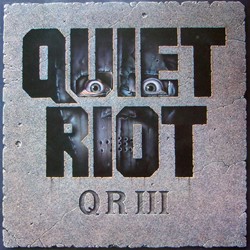 Quiet Riot Albums To Be Reissued By Rock Candy Records

Rock Candy Records have just re-issued two Quiet Riot albums — 1986’s ‘QRII’ and 1988’s self-titled album with Paul Shortino on vocals. Both been re-issued with 24-bit remastering from the original source tapes, a 4,000 word essay about the making of the album, full band invlovement and additional previously unseen photos spread out over a 16 page full colour booklet. Both CDs are available for purchase at www.rockcandyrecords.co.uk.

QR III
‘QR III’ is, as the name suggests, Quiet Riot’s third album (originally released in 1986) and showcases some major changes, not only musically but also on the personnel front; bassist Rudy Sarzo was replaced by Chuck Wright (from Giuffria). Showcasing a far more mature sound, the band introduced keyboards and featured song writing that suggested that they had finally come of age, relying less on simplistic shout-it-out-loud hooks and more on multiple layers of rich melody with impressive muscle. The arrangements were mature without giving way to syrupy lullabies or saccharin ballads.

Sadly, the band’s fortunes, through no fault of their own, continued to spiral out of control, resulting in an album that was critically lauded as their best work but one that in purely commercial terms sadly underachieved. In the end, internal unrest resulted in flamboyant front man Kevin Dubrow being asked to leave the band — for many an unthinkable development — signaling the end of a once great institution.

Quiet Riot
The general consensus of opinion about Quiet Riot’s career trajectory is that they started off taking a rocket ride to the stars – their debut album sold in excess of ten million copies – only to embarrassingly crash and burn just a few short years later. Commercially speaking that was a true account of the situation, but on a musical level many agree that the band’s output was inversely proportional to their chart decline, getting better and more inventive as time moved on.The band’s reached their nadir following the release of ‘Quiet Riot III’, when their outrageous front man Kevin Dubrow was summarily fired from the line-up. They intended to carry on under a new moniker and looked to modify their sound, whilst searching for a replacement vocalist. They quickly settled on ex Rough Cutt singer Paul Shortino, developed a chest thumping blues rock style and met with their record company about recording a new album, only to be told that contractually, and for commercial reasons, they would have to continue using the Quiet Riot name.

Despite the odds stacked against them the band’s final album, curiously self tiled, originally released in 1988 was a spectacular statement, drinking from the same bluesy well as Whitesnake, Rainbow and Dio. Paul Shortino’s vocals are both impressive and effective, whilst the songs are little short of spectacular, leaving nobody in any doubt that had this project been launched as a brand new entity they might well have gained a new lease of life to rival their original success.