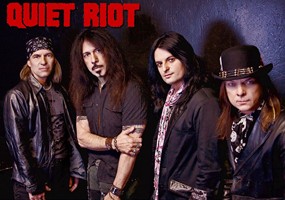 After firing Mark Huff in January, and having former Montrose singer Keith St. John temporarily front the band for a handful of live dates, Quiet Riot have now announced that Scott Vokoun is the band’s new frontman.

Said drummer Frankie Banali, “I spoke several weeks ago with my friend and vocalist Keith St John to once again thank him for lending his talents to Quiet Riot during our time of need. Keith stepped in on very short notice so that Quiet Riot could meet our live dates in February. Keith knocked it out of the park with great vocals and performances and we are forever in his debt. Quiet Riot takes this opportunity to introduce our new vocalist Scott Vokoun and we look forward to seeing all of you on tour!”

Huff, who took over for the late Kevin DuBrow in September of 2010, said about his firing from the band earlier this year, “As I sit in hospital … wait for my brain surgery … I have been let go from Quiet Riot. And nobody’s had balls to tell it to my face. Interesting … the rock ‘n’ roll business. I have to read the news in a post that’s not even directed to me? … WTF? … Let me tell all my friends … don’t count me out … Watch what happens. It’s obvious what I ever meant to this situation … I deserve better treatment … Don’t worry about me … Worry about your own bad selves. And I am gonna take the high road … I have so much shit I could speak … Stay tuned, my friends”

Quiet Riot drummer Frankie Banali countered by saying, “With regards to Mark Huff: My policy has always been not to air out the dirty laundry in public. That policy remains the same even in light of those who chose to make accusations. The fact is that Mr. Huff’s medical condition had nothing to do with the decision that was made though it is unfortunate that it comes at such a time. His wife assured me that Mark would be home this week, and as legal protocol dictated, a certified letter was sent informing Mark of the decision that was made and why it was made. This was days ago. The content of that letter is a private matter unless Mr. Huff decides to make the reason for his dismissal made public which I believe would be counterproductive for him. I will not go tit for tat with this issue. If certain person wish to villainies me, that is their prerogative.”