Quiet Riot and Hookers & Blow guitarist Alex Grossi was recently interviewed by the Buzz and spoke about his views for the future of rock n’ roll and how he plays his part in keeping it alive. 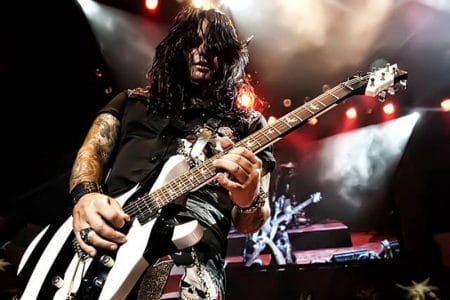 Grossi advised: “People are really caught in the music of their youth. (It) defines who you are, generally. I like to look at where music is going technology-wise, and I love that people are banning cell phones at shows. Jack White just announced he was doing it, the Misfits are doing it. You have to lock your phone away in a pouch and don’t get it back until the end of the show.

In terms of playing on Hookers & Blow bandmate Dizzy Reed‘s new solo album Rock ‘N’ Roll Ain’t Easy, Grossi stated: “… that album has been a long time in the making. I’m on it with a plethora of good players. You can pre-order it on Amazon now. Search for “Dizzy Reed – Rock ‘N’ Roll Ain’t Easy.” He wrote it all himself for the most part. I can’t even remember the names of all the songs I played on; it was like a decade ago. It’s been in the making for over ten years. Good things come to those who wait, and it’s a real record that was made on tape and in a real studio in Los Angeles. I’m super happy for Dizzy. He’s one of my best friends ever, and it’s a long time in the making, and it’s great for rock and roll.”

You can read the rest of the interview with Grossi at Buzz.