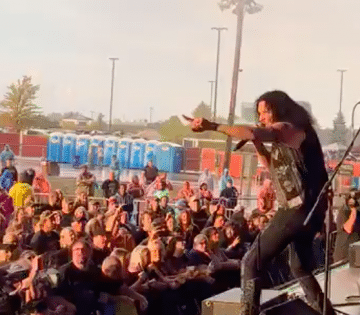 Quiet Riot‘s first gig with Pearl back in the line-up was at the Grand Rocktember Music Festival at the Grand Casino Amphitheater in Hinkcley, Minnesota, USA yesterday (on September 21, 2019).

Unfortunately, the band’s long-time drummer and leader Frankie Banali was once again missing in action. This is seemingly a regular occurrence now.

One fan expressed her disappointment as she commented: “I trekked across the state and walked blocks and blocks out in the pouring rain to the amphitheater to see Quiet Riot. Frankie Banali I’ve loved you for 30 plus years and your not even here. This is bullshit! This is a fucking cover band!”