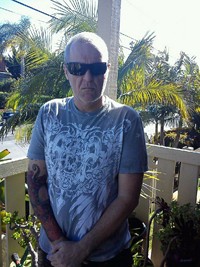 Mark Huff was hired on as lead singer for Quiet Riot in September of 2010, and it was no easy feat to take over the frontman role that was previously held by the late charismatic ‘big mouth’ Kevin DuBrow. To his credit, Huff didn’t try to replace DuBrow — he simply wanted to do the music justice.

All seemed to be going well within the Quiet Riot camp. The band was playing live consistently, and by all accounts the performances were very favorable. Then Mark Huff suffered a serious health condition — he required brain surgery! As Huff awaited the much needed surgery he received word that he had been relieved from his position as singer in Quiet Riot. The firing didn’t take place via phone, nor was it face it face — Huff found out online!

“I’ve never had any problems like this in my life,” Mark Huff tells SleazeRoxx.com’s Ruben Mosqueda. “I woke up on January 1st (2012) and I had a seizure. I woke up in the hospital actually. I was told that I had an AVM, which is arteriovenous malformation, in my brain. I was told that it was something that needed to be taken care of right away, but I would make a full recovery. I contacted the guys in Quiet Riot and let them know. In the coming days no one from Quiet Riot came down to see me. I had to find out through the internet that I had been fired from the band.”

While Huff’s tenure in Quiet Riot wasn’t lengthy, he did win over the fans and received a considerable amount of support when he was let go. Quiet Riot on the other hand received some backlash, due in part to the pusillanimous and insensitive manner in which drummer Frankie Banali went about cutting ties with Huff. At the time Banali wrote, “With regards to Mark Huff; my policy has always been not to air out the dirty laundry in public. That policy remains the same even in light of those who chose to make accusations. The fact is that Mr. Huff’s medical condition had nothing to do with the decision that was made, though it is unfortunate that it comes at such a time. His wife assured me that Mark would be home this week, and as legal protocol dictated, a certified letter was sent informing Mark of the decision that was made and why it was made. The content of that letter is a private matter unless Mr. Huff decides to make the reason for his dismissal made public, which I believe would be counterproductive for him. I will not go tit for tat with this issue. If certain persons wish to villainize me, that is their prerogative.”

But the firing still doesn’t sit well with Huff. “As far as reasons for being fired; I had been signed on for the year (2012). I had dates, I had flight itineraries, and I was ready to go,” continues the singer. “This was something that came out of nowhere. I understand people need to get back to work but I’m not happy at how they went about it. I’m past that now, but I don’t like when people go out of their way to stifle my mouth about the truth. I’m an honest, hard-working person and a skilled musician. I deserve respect — that’s the bottom line.”

Mark Huff had successful brain surgery in January and is currently on the mend, yet the singer reveals he was still ready to fulfill his touring obligations with Quiet Riot. “Because of where this was on my brain, medical staff didn’t know how I was going to come out of it. I could have died, I could have been blind — they just didn’t know how things were going to turn out. I was in a coma for like 14 days and I almost died because I had another seizure. I’m thankful to be alive — my hair is a little shorter, my memory is back, and I can sing anything that I was able to sing before this all happened.” Huff proclaims. “It’s very unfortunate that Quiet Riot didn’t wait until afterward to see how things turned out before firing me. I still don’t believe it. I was hired to be their singer and to do the documentary. I wasn’t there to replace anyone, I was there to pay tribute and help Quiet Riot continue. I think I was doing one hell of a job. Sure my feelings were hurt, but I’m moving past that, although it would be fake and untruthful to wish them well — I just don’t care anymore. I don’t wish them anything.”

Does Huff feel like the members of Quiet Riot kicked him while he was down? “I still remember the call I got to come down and audition for the band,” the vocalist replies, “I couldn’t believe it. I just wanted to be the best singer they could have. I was treated well, I thought that was sincere, but I guess in the end it’s all about their wallets. I’ve received a lot of support from friends, fans, and it’s helped lift my spirit.”

While there were rumors of Quiet Riot working on a new album with Huff, the singer explains, “There was talk about doing new music down the road. It didn’t get past the talking stages though because we couldn’t really find a direction we wanted to go. I think I was ‘good enough’ for what they were doing at the time, but I think they had other plans. I’d really like to know why I was actually fired! The statement Frankie released was vague, was it not?! I always had nothing but the best intentions of being part of the band.”

Despite the situation with Quiet Riot, things are beginning to look up for Huff. “I have been given a clean bill of health by my surgeon,” the singer concludes. “I’m going to be doing some singing with a band called 69 Angels. I have a friend in San Francisco who was bothering me about singing on a record before I had my seizure. I plan on heading over to San Francisco to record with 69 Angels. I’m also really looking forward to doing live dates with (Van Halen tribute band) 5150 in July. I’m not going shy away from any opportunity to sing if my voice fits it. I’m looking forward to getting back to work.”