With the announcement two days ago that James Durbin was no longer in Quiet Riot and Jizzy Pearl was returning to the band as its lead vocalist, fans were understandably asking themselves what would happen with the band’s new studio album Hollywood Cowboys which is scheduled for release via Frontiers Music Srl on November 9, 2019 with Durbin on lead vocals. 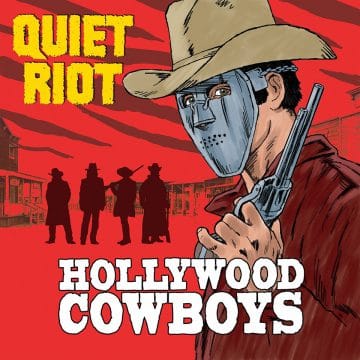 This is especially so since Quiet Riot elected to re-record the vocals of their previous singer Seann Nicols when the latter was dismissed from the band about one month and a half before the release of the album Road Rage. The record was supposed to be released back on April 21, 2017 but when it was announced that Durbin was replacing Nicols in early March 2017, the decision was made to re-record the songs for the album with Durbin handling the lead vocals and the release of Road Rage was delayed to August 4, 2017.

This time around, drummer Frankie Banali has elected not to go through that again and will proceed with releasing Hollywood Cowboys with Durbin on lead vocals even though the latter has been replaced by Pearl two months prior to the record’s release date.

Two days ago at around 5:00 pm, Banali announced via one of his Facebook accounts that “The Dark One” — Jizzy Pearl — was returning to Quiet Riot. Banali added a few comments on the topic of whether the upcoming new Quiet Riot album would be re-re-recorded with Pearl‘s vocals by indicating to one person that it was “too late” to do so before posting the following comments:

“HERE’S THE REASON I WON’T RE-RECORD THE VOCALS FOR HOLLYWOOD COWBOYS…. IT WOULD MEAN THAT IF MANUFACTURING HAS ALREADY STARTED FOR BOTH VINYL AND CD, I WOULD HAVE TO PAY TO HAVE THOSE UNITS DESTROYED. THEN THE ADDED EXPENSE OF BOOKING STUDIO TIME, ENGINEER, TO RECORD JIZZY‘S VOCALS. THEN THE EXPENSE OF REMIXING AND MASTERING ALL OUT OF MY POCKET…. EVERYONE THINKS IT’S REALLY EASY…. IT’S NOT AND EXPENSIVE…. NOT TO MENTION REDOING ALL THE TEXT IN THE ARTWORK….” 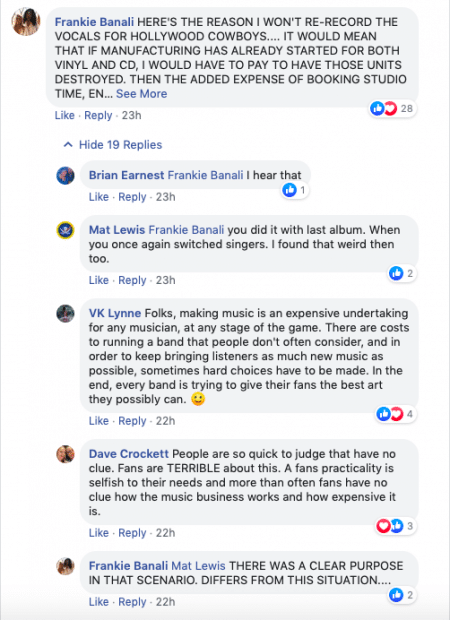