The following message was posted by Tyson Leslie on his Facebook page earlier today. Leslie ended up replacing Westfall in Banshee for one reunion show at Rocklahoma in Pryor, Oklahoma, USA back in 2008: 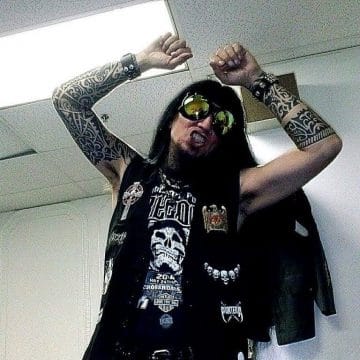 Not sure where to start with this one.

Bill Westfall was a super kind human being and a force to be reckoned with on the bass guitar. If you were from Kansas City and grew up in the 80s and early 90s, you knew who Bill Westfall was. EVERYONE knew who Banshee was. And Bill had a style and tone that was completely unique to Bill.

In 2008, I filled in for him for reasons honestly, completely unknown to me as to why he didn’t end up playing with the original lineup that year.

It was terrifying, an honor beyond words, and a very pivotal moment in my career.

And this isn’t to make it about me. The point in saying that is that I had to get inside of Bill‘s bass parts and try to recreate them to the best of my abilities. And that was NOT easy.

He was tastefully busy in a band that had an additionally tastefully busy drummer in Kent Burnham and a shredding crazy guitar player in Terry Dunn. Bill‘s bass lines were challenging! There was tapping, and runs all up and down the neck. There was a lot of different influences in his playing and it showed musically!

Banshee was a unique band for the time.

You have to understand that when these guys got signed, it was all about Poison, Motley Crue, Bon Jovi, – PRETTY dudes with polished pretty vocals and catchy songs.

Banshee was pretty too… but I don’t believe that was their choosing. They sounded way more like POWER Metal and Dio than Warrant or Winger. They were HEAVY in a very Judas Priest/Maiden way.

I finally MET Bill a few years afterwords when I was playing in my band 90Minutes. He was even slated to fill in for me once when I had to be absent from the band. That didn’t happen for reasons I also cannot recall, and we didn’t see each other much after that. But I befriended his son shortly before I moved to Nashville. And I saw him on the Shiprocked Cruise in February.

His son is a very accomplished musician and sound engineer in his own right.

Bill had been sick for quite some time. And unfortunately we knew this day was coming. And truth be told, I believe everyone expected that day to have already happened. But he survived the odds for a very long time and will be remembered as one of Kansas City’s finest musicians and a fighter, a father, and just an overall good nice guy to be around and be associated with.

Current Banshee lead vocalist George Call played in the band with Westfall from 2014 to 2015. The following message was posted by Call on Facebook page earlier today: “Bill Westfall was a joy to be around. Always smiling, the guy could play his ass off and look cool doing it. If you’ve seen any live bands at all, you’ll known that those two things are not mutually exclusive. Though we did do live shows together, my biggest regret is that we never had the chance to record together. My deepest condolences to his son Jordan Westfall, his family, to Laura, to his fans and to all of those who loved him so. All of us at Banshee will miss Bill tremendously.”

Banshee‘s “Shoot Down The Night” video (from Race Against Time album):

Banshee Shoot Down The Night 1989

Tommy Lee Flood, Terry Dunn and the other boy’s from Kansas City’s Own Nationaly Signed Recording Stars of Banshee are presented in there one and only video …