Sad news as former Judas Priest and Trapeze drummer Dave Holland reportedly passed away a few days ago at the age of 69. The cause of death is unknown. 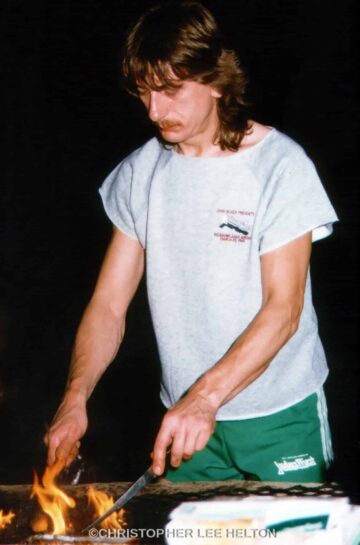 The website dmme.net reports that the news was confirmed by Trapeze management.

There is a report of an internet hoax about the death of Holland but it appears to be related to jazz musician Dave Holland.

Wikipedia states the following in part about Holland (with slight edits):

Early Life:
At the age of six, Holland began piano lessons, but soon developed a “mania for the drums” in his own words and begged his parents to let him have a set. After his first appearance as a stand-in for a local band, Holland realised he wanted to be a musician. When he was 14 years old, he supplemented his pocket money by playing with another local band titled The Drumbeats, and selling furniture and carpets.

As a youngster, Holland listened to traditional jazz. He cited his first rock influence as Johnny Kidd and the Pirates. Later, he became interested in funk music in the vein of Booker T & the MG’s, blues rock of Free and progressive–psychedelic music of Traffic.

Early Bands:
Having moved to Rugby, Holland joined The Liberators and continued playing with them after education. The Liberators soon evolved into Pinkerton’s Assorted Colours, a folk pop band that put autoharp to good use, taking after The Loving Spoonful. In 1966 a single, “Mirror Mirror” (released 15 January 1966 on Decca, produced by future The Moody Blues producer Tony Clarke), peaked at No. 8 in the UK Singles Chart.

Finders Keepers:
Holland stayed with the band until August 1968, when he joined Finders Keepers, a pop cover outfit. However, Holland continued studio session work. He did not play on a 1969 No. 5 hit single “Smile a Little Smile for Me” released by the band that used to be Pinkerton’s Assorted Colours under the name of The Flying Machine.

Trapeze:
Trapeze appeared in the British TV show Colour Me Pop and soon was swamped with offers of recording contracts, including one from The Beatles‘ Apple. Trapeze, however, settled for the newly formed Threshold label, belonging to The Moody Blues members. The band would soon open for The Moodies and other well-known acts. On Threshold, the band released three records, the debut as a quintet and the rest as a power trio.

Trapeze were gaining momentum at the time, especially in the southern United States, but lost a major contributor as Glenn Hughes decided to leave the band and join Deep Purple for the recording of their Burn album.

Galley and Holland added a bass player and a second guitarist. Holland and Galley also toured as part of John Lodge – Justin Hayward (of The Moody Blues fame) band The Blue Jays.

In 1978, Trapeze recorded their last studio LP, Hold On.

Earlier on, both Galley and Holland lent a hand in the recording of Glenn Hughes‘ first solo album, Play Me Out, offering a unique blend of psychedelic jazz funk. Holland was assisted by Mark Nauseef on percussion.

In 1979 and 1980, Holland recorded some drum parts for Justin Hayward‘s solo albums, Songwriter and Night Flight.

Judas Priest:
Holland left Trapeze and joined Judas Priest in August 1979. He played drums on many of Judas Priest‘s platinum albums, such as British Steel, Screaming for Vengeance, Defenders of the Faith, and Turbo. Ram It Down, however, was recorded with the use of a drum computer, although Holland was credited with the parts.

During the 1980s, Holland also collaborated with guitarist Robin George, as part of his band Life and on George‘s solo project, Dangerous Music.

In 1989, personal problems (health and family issues) and musical differences forced Holland to leave Judas Priest. He was replaced by original Saints Or Sinners drummer Scott Travis, who had also previously played in the band Racer X.

Later career:
Throughout the 1990s, besides touring with briefly reformed Trapeze and filling in for various bands like The Screaming Jets during their European tours, Holland gave drum clinics and private lessons, managed and produced bands such as the Swedish “teen funk trio” Shutlanger Sam whom Holland introduced in person at a show with his former Trapeze bandmate Glenn Hughes in Vänersborg 1996, and played on various recordings of his former mates. In 1996, he participated in sessions that involved Glenn Hughes, Tony Iommi of Black Sabbath fame, and keyboardist Don Airey. In 1998, a collaboration with Al Atkins, Judas Priest‘s original singer, was released, featuring a few covers of early Priest songs that Holland did not originally play on. Judas Priest with Atkins at the helm had supported Trapeze in 1971.

Imprisonment:
In 2004, Holland was found guilty of attempted rape and several indecent assaults against a 17-year-old male with learning disabilities to whom he had been giving drum lessons. In an interview during the criminal proceedings, Holland revealed that he is bisexual. He was sentenced to eight years in prison. As a result, Black Sabbath guitarist Tony Iommi chose to replace Holland‘s drum parts on The 1996 DEP Sessions because he did not want a convicted sex offender appearing on his album. Holland was scheduled for release in 2012 and was reportedly out by June that year.

In late 2006, Holland, who has steadfastly maintained his innocence, revealed that he was in the process of writing a tell-all autobiography. Writing to Judas Priest biographer Neil Daniels from prison, Holland stated “I was convicted of a crime that I didn’t commit, and like so many others in similar situations to the one in which I find myself, an offense that never even existed in the first place…”.”