Sad news for AC/DC fans as George Young, who is the older brother of rhythm guitarist Malcolm Young and lead guitarist Angus Young, passed away at the age of 70 yesterday (on October 22, 2017). George Young co-produced a number of the early AC/DC albums and played bass on a number of tracks on the group’s debut album High Voltage. “It is with pain in our heart that we have to announce the passing of our beloved brother and mentor George Young. Without his help and guidance there would not have been an AC/DC.

As a musician, songwriter, producer, advisor and much, much more, you could not ask for a more dedicated and professional man.

As a brother, you could not ask for a finer brother. For all he did and gave to us throughout his life, we will always remember him with gratitude and hold him close to our hearts.”

“George Young grew up in Cranhill, in Glasgow, Scotland. His father William Young (born February 1911) was a labourer, and his mother Margaret (born July 1913, her maiden name was also Young) was a housewife. Young with his parents and two younger brothers, Malcolm (born January 1953) and Angus (born March 1955), emigrated to Australia in May 1963. His eldest brother Stephen (1933 – 1989) remained in Scotland. Another elder brother, Alex (1938 – 1997), also stayed in Scotland, and was later a member of London-based group, Grapefruit. 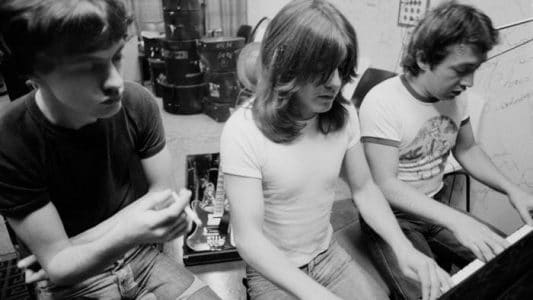 Starting his career in Sydney, and attending Sefton High School as his secondary school, George Young first achieved international success in the 1960s as the rhythm guitarist in the band the Easybeats. Young co-wrote nearly all of their songs, first with lead singer Stevie Wright, and later with lead guitarist Harry Vanda. At the ARIA Music Awards of 2005, the group were inducted into their Hall of Fame. In 2007, Australian Musician magazine selected the meeting of Vanda and Young at the Villawood migrant hostel in 1964 as the most significant event in Australian pop and rock music history.

After the band dissolved in 1970, Vanda and Young concentrated on writing and producing pop and rock songs for other recording artists, and for themselves under various stage names, including as Flash and the Pan. One recording studio-based group was Marcus Hook Roll Band, with his brothers, Malcolm and Angus Young. Angus and Malcolm formed a hard rock group, AC/DC, in 1973….

With Vanda and businessman Ted Albert, he formed Albert Productions in Sydney in 1973. He also helped his younger brothers with their AC/DC band project, that went on to become a massive success internationally. George Young famously declared to his younger brothers “that he didn’t believe a band can ever call itself a band until it’s done at least 200 gigs”. He became famous by co-producing AC/DC, Rose Tattoo, The Angels, John Paul Young and many other acts. He co-produced AC/DC‘s early albums, such as Let There Be Rock, Dirty Deeds Done Dirt Cheap, T.N.T., Powerage and High Voltage, and played as AC/DC‘s bass guitarist for a short stint, early in their career. He produced AC/DC‘s 2000 album Stiff Upper Lip.