Sources have revealed that former Autograph drummer Keni Richards passed away in the evening of April 8, 2017.

Details about how Richards passed away have yet to be uncovered.

Wikipedia describes Autograph‘s beginnings and Richards‘ time in the band as follows (with slight edits):

“Autograph began in late 1983 originally as a solo project for singer, songwriter & guitarist Steve Plunkett, who had recently left the band Silver Condor. Plunkett then began playing and recording his own material with a group of his musician friends, most of whom had previously played with him in other bands.

On lead guitar was Steve Lynch, who had played with Plunkett in the band Looker.

Bassist Randy Rand knew Plunkett from their days together in Wolfgang, a prominent club band in Pasadena, California that has been described as a local legend, and of which Kevin Dubrow (lead singer of Quiet Riot) once said, “They smoked us all… they got a better response than us and Van Halen“.

Keyboardist Steve Isham, who had also earlier played with mutual acquaintance Holly Penfield, was brought in to give the fledgling band a more modern sound.

Quickly, this group of musicians began playing and recording together, taking the form of an actual band. Plunkett chose the name “Autograph” for the band, having been inspired by hearing Def Leppard‘s similarly titled song, “Photograph,” on the radio. They recorded their first rough demos in late 1983, but played them only for a few close friends. One of these friends was

Andy Johns, a famous record producer who Steve Plunkett had met while helping singer Joe Cerisano produce Silver Condor‘s second album Trouble At Home. Johns invited the band to re-record and upgrade those demos at the world-famous Record Plant Studios for free under his guidance. Keni Richards then played the demo for Roth, who subsequently invited the band to open for Van Halen on their 1984 tour. The band rose to prominence opening for Van Halen, ultimately playing 48 shows, an act of distinction for an unsigned band. Due to their rising popularity, Autograph soon signed a contract with RCA Records following a performance at Madison Square Garden in New York City in late 1984….”

Wikipedia continues: “The band left RCA Records in early 1988. Isham left the band to pursue other options but was not replaced, as the band felt they no longer needed keyboards and wanted to take a newer and heavier direction. The remaining members began recording a new album in 1988 which they hoped to release sometime the following year, but those plans never occurred due to lack of any type of label support. Richards also left the band around this time.”

Richards eventually turned to painting as he talked about his transition from drumming to painting in an interview with Legendary Rock Interviews in 2011:

“It’s a long story, not all good or “nice” story….It goes back to about 1994, I had been OUT of Autograph and in a band called Dirty White Boy with Earl Slick (David Bowie guitarist). I had neck surgery and the pain medications I had been taking were opiates which eventually led me to the wonderful world of heroin. I went on a really nasty heroin run that was leading me right to my bottom. I had pawned all my gold records, everything, and was homeless. An organization called M.A.P. found me in 1997 and took me to a hospital where I was treated by my addictions doctor, Dr. Drew Pinsky. I was eighteen days into coming off heroin when I happened upon the little art room and they had some brown paper and some ketchup bottles of paint and I ended up messing around with chopsticks and finger painting and did this thing. I didn’t know anything about painting and didn’t consider it to be anything at all. 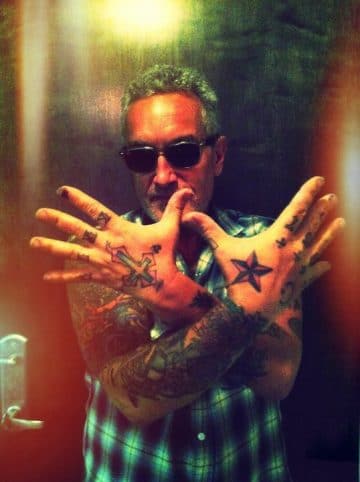 The next day, Dr. Drew said “Who did this?” and I said me and that just started me down this path. Also, when I was in there my next door neighbor was Mark (Lanegan) from Screaming Trees who was BEST friends with Kurt Cobain and eventually ended up being in Queens of The Stone Age. I met him through another patient who I can’t name but can say was in the band HOLE who introduced me and said, “Oh, this was Kurt’s best friend, Mark, he’s in a band called Screaming Trees, Mark, this is Keni”. So here’s this heavy metal guy and this big grunge guy writing poetry and playing piano together (laughs). We wrote a bunch of songs together while we were inside that ended up being a classic, 5 star classic album called “Scraps At Midnight”. Then I worked on an album called “Field Songs” with Mark, another GREAT record, worked with Duff from GNR, who co-wrote some stuff on there. I’ve played piano since I was little and we wrote songs and I played piano on the album.

Mark and I just worked on a song for East Bound and Down, the show on HBO. I’ve been working with him for about 13 years now. I met Jerry Cantrell through Mark and got to really know him. Mark is my best friend and he had told Jerry “Hey, if you ever need help or anything get ahold of my friend Keni” and true story, there’s a knock on my door and this long haired blond guy standing there and he just looks at me and says “Mark sent me”. I didn’t even know he was in Alice In Chains until the next day I was driving him to a funeral and “Rooster” was on the radio and I said “My god, that song is amazing” and he just looks at me and says “Yeah, I wrote that about my dad”. I flew out a couple times to Jerry’s ranch and got to meet the “Rooster”….it was great! I worked on a Joe Cocker album after Autograph. I’ve had a really interesting rock and roll life aside from Autograph that most people don’t have any idea about. Most Autograph fans don’t know how great Mark Lanegan is, he’s a legend. I’ve been to hell on drugs but I’ve made a hell of a comeback. Some of my fans know about my artwork, I have exhibited at art shows, I have a Keni Richards art page on Facebook.”

By 2014, Autograph had reformed with original band members Lynch, Rand and Richards with singer Simon Daniels replacing Plunkett. However, Richards was soon apparently fired as per Metal Sludge and replaced with drummer Marc Weiland.

Autograph‘s “Turn Up The Radio” video:

Autograph – Turn up the Radio

Watch the official music video for “Turn Up the Radio” by AutographListen to Autograph: https://Autograph.lnk.to/listenYDSubscribe to the official Autograph …