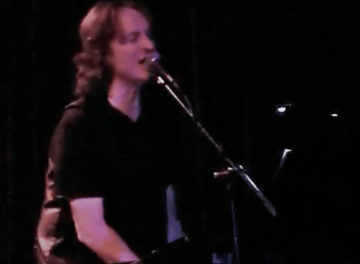 Sleaze Roxx has some sad news to report as former David Lee Roth keyboardist Brett Tuggle passed away from brain cancer yesterday (on June 19, 2022) at the reported age of 70.

Wikipedia states the following in part about Tuggle‘s time with David Lee Roth:

“While Tuggle is known for his onstage keyboard playing for Fleetwood Mac, he is best known for his performing and songwriting as keyboard player for Roth on the 1986/1987 Eat ‘Em and Smile tour, the 1988 Skyscraper tour, the 1991 A Little Ain’t Enough tour where he also has several co-writes on that album, and up to the 1994 Your Filthy Little Mouth tour. He continued to perform on various occasions with Roth until some point in 1996/1997.” 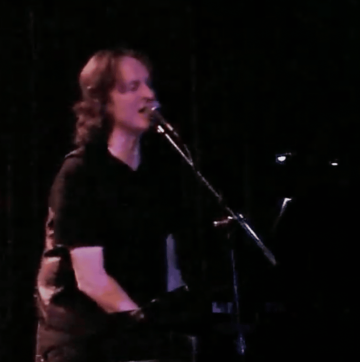 The following message was posted on the Facebook page from Tuggle‘s brother-in-law Brian O’Meara yesterday (with slight edits):

“Last Thursday we lost my brother to prostate/bone cancer. Tonight, we lost my bother in law to brain cancer.

He was playing Chopin on the piano. I was blown away. This was a month after my first band, The Daniel’s, and broken up by the Vietnam War and I was looking for a new band.

I knew at that moment he was a rare talent. We put a band together called the US Male. Brett and I made music together for several years with a bunch of other super talented musicians.

Brett and I married the DiSalle sisters, Jody DiSalle O’Meara and Paula Disalle-Leeds making us brothers in law.

After I retired from the music business, Brett Tuggle continued to play for the last five decades. The list of the bands he was with is a long impressive one. The last 15 years with Fleetwood Mac, Lindsey Buckingham and Stevie Nicks. For ten years prior to The Mac, Tuggs played with David Lee Roth for ten years.

Rick Springfield before that.

Brett and I stayed close thru the years. We considered ourselves as brothers.

His musicality is legendary and he had a voice of an angel.

The planet will miss your creativity, joyful spirit and bringing all of us together thru your music.

I have a tear in my eye tonight for loosing two brothers in a week.

Check out what Rolling Stone Magazine has to say about this incredible talent.” 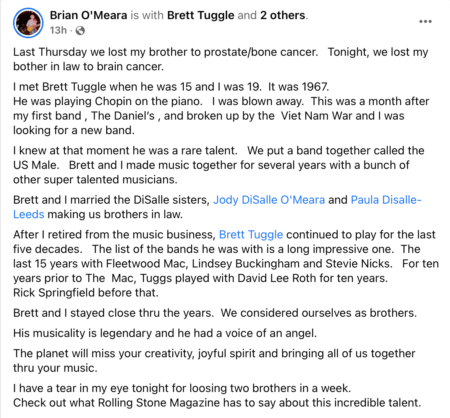