Sleaze Roxx has some sad news to report as former Rose Tattoo slide guitarist John Meyer passed away back on September 1, 2020 as reported by Latest News South Africa.

Wikipedia indicates that Meyer was in Rose Tattoo from 1983 to 1985.

The following message was posted on Rose Tattoo‘s Facebook page six days ago (with slight edits):

“It is with a heavy heart we share the news of John Meyer’s passing. Rest In Peace. 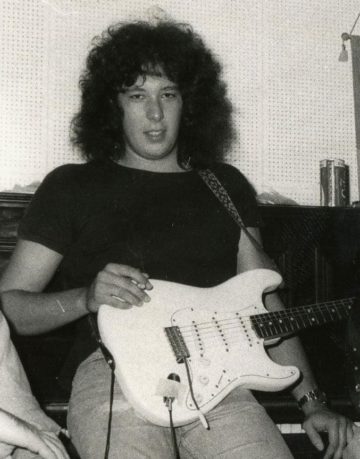 John was born in Three Springs, a small farming town in rural Western Australia. The first born of Dutch immigrants, John’s father Jan was a jazz fan and John grew up to the sounds of Glenn Miller, Artie Shaw, Benny Goodman and the like. Jan, known to his friends as “Fred”, also played the guitar, saxophone, clarinet and later played bass guitar in a band called the “Spectors” which featured originally as the drummer and then lead singer, a young Bon Scott who later went on to fame as the lead singer of AC/DC.

John received a drum kit from his father at age 13 and with much enthusiasm joined a band but in his own words, ”It became obvious to my older band mates that maybe I should take up panel beating or wood chopping. I was keen but sadly lacked that necessary ingredient, skill.”

He was lucky that his dad had a number of instruments including guitars, woodwind instruments and a piano, so he amused himself by trying them out. The guitar seemed impossible at first, but at that stage his hero’s were John Lennon of The Beatles and Hank Marvin of the Shadows, who he wanted to emulate.

Around age 14, at a friend’s house, a recording of Peter Green playing guitar with “John Mayall’s Bluesbreakers” was heard and John’s mission in life changed forever.

”After a short time I managed to purchase a second hand Fender Stratocaster Guitar, and my dad actually built my first amplifier. I asked my ex band mates if I could try out as guitarist. I suspect they were highly amused by this but I was in. I couldn’t have been happier!”

John started playing gigs in Perth nightclubs at age 16 which caused a few problems as the legal drinking age in those days was 21!

At age 17, he was surprised when he featured in a national music publication as one of the top Guitar players in Perth along with Peter Walker, a guitarist John much admired from the legendary “Bakery.”

Since then, Western Australian audiences witnessed the rise of John’s guitar skills in performances and recordings with bands like Fatty Lumpkin and the power trio Saracen.

John had also been taking lessons to learn different playing styles but according to John, Lionel Cranfield [who still owns Zenith Music, a Perth music Institution] gave him classical guitar lessons which was a turning point as far as his technique, discipline skills were concerned. “I was now completely obsessed with playing guitar. Any thoughts of maybe becoming a brain surgeon were laid to rest – music was now my life”.

The next few years were spent touring Australia regularly and making some recordings and honing his skills. During this time, several offers from top Australian bands to move to the east coast were rejected. After one tour with Saracen, who were often advertised as being the biggest unsigned crowd-pulling band in the country, John decided to move on.

After relocating to Sydney in 1981, John toured extensively with some of the big names in Australian music including Swanee and Sharon O’Neil before joining Australian legends Rose Tattoo. “Angry Anderson and I had met a few years previously when I played the legendary Bondi Lifesaver in Sydney. Angry was the celebrity DJ that night and after our performance, we received a bottle of Jack Daniels backstage along with a message, ‘Great gig, regards Angry’.”

“A couple of years later I received a call from Angry while he was touring the along with ZZ Top and Aerosmith and he asked “Do you have a passport?” Robin Riley, a friend and a great player had just left the band. I was reluctant due to the circumstances and I was already working with Jimmy Barnes’ brother John Swan and his band Swanee.” John had great respect for the great singer, ex AC/DC bass player Mark Evans, who was also in the band. “I was really enjoying working with these guys but soon after I met with Angry and Robbie Williams, his manager, and entered a never to be forgotten period of my musical journey.”

Over the next few years, John co-wrote many songs with Angry Anderson that appeared on the “Southern Stars” and “Beats of A Single Drum” albums.

John then joined Australia’s premier blues band Chain. “I had been a fan of Chain since day one and regular guitarist Phil Manning was ill so Matt Taylor gave me a call, I had just left Rose Tattoo and was a little undecided about it at first, but once we started the first tour, I loved the opportunity to play blues, although it took a while to play a more subdued style after years of heavy rock. Phil Manning decided not to return to the band so Matt asked me to sign up permanently, well at least for the next four years!” Albums recorded during this period include ”Australian Rhythm And Blues” and ”Blue Metal”. John also co-wrote with Matt Taylor for these albums and co-produced “Blue Metal”. John appeared on Matt Taylor’s solo album, ”Walls To McGoo”, co-writing the track “Adelaide River,” one of his favourite songs.

During this period, “Saracen” briefly reformed for some sell-out reunion shows. The band also recorded a self-titled album, which although released independently, received some excellent reviews in European music publications.

John recorded his first all instrumental album in 1992 and was rewarded with that year’s West Australian music industry’s Outstanding Album of the Year Award. This album also received The Producers Award for John and Tom Thorpe.

John was awarded Guitarist of the Year and in 1993 and received an award from the West Australian Music Industry Association in recognition of Outstanding Artistic Contribution to the State through Achievement in the Arts.

John then spent time developing his studio and producing / composing music for television advertising and documentaries.

During this time, session work for other studios and artists beckoned along with teaching select students.

In 1999, John released an instrumental album “The Shaman” with jazz / fusion influences to critical acclaim.

In 2003, John was inducted into the West Australian Music Industry’s “Hall of Fame.”

November 2004 at the Bridgetown Blues Festival saw the launch of the album “John Meyer’s Blues Express” featuring Peter Oats on bass guitar and vocals, Ric Eastman on drums and John on guitar.

John Meyer’s Blues Express appeared at The Australian Blues Festival in Goulburn NSW in February 2008 and continued to play select shows including the 2008 “Blues at Bridgetown”.