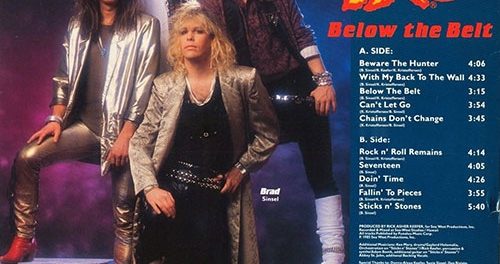 Melodic Rock has reported today that TKO founder and frontman Brad Sinsel has advised that former TKO member Michael Alexisch has passed away: 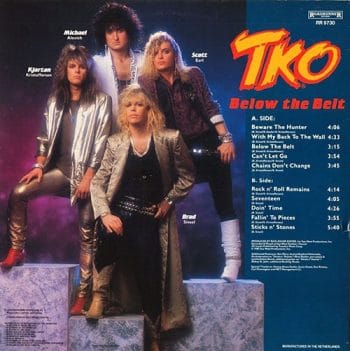 “Just got sum news that comes as a bit of a shock. My lifelong friend & frequent band mate Michael Alexisch (later changed to Alex) has passed. He always had the best jokes, even when the going got rough. He’s the tall one in this photo blk hair behind me… He leaves this world a lesser place…”

Wikipedia reports Alexisch‘s role in TKO as follows: :”TKO toured the U.S. with the likes of Foreigner, Ted Nugent, Robin Trower and Dio to promote In Your Face before heading back in the studio with Rick Keefer for their third album. Released in 1986 on the Roadrunner label, Below the Belt was not as well received as its predecessor and featured Sinsel, Kristoffersen, Earl and Mary who soon left to join Alice Cooper. He was briefly replaced by Michael Alexich, an old friend of Sinsel‘s; TKO would play their last show in 1986 at the Paramount Theater in Seattle.”

The Metal Archives lists Alexisch as having been a part of TKO in 1986 and 1987.

Sleaze Roxx stated the following in its album review of TKO‘s debut album Let It Roll back in 2008: “Let It Roll reminds me of early Riot material, in that both bands were on the brink of something special but just hadn’t quite put all the pieces together yet. In the case of TKO, at this point in their career they fell somewhere between The Who and a working-man’s Boston. The guitars hadn’t been cranked up yet, although vocalist Brad Sinsel (who later resurfaced in War Babies) already had his unique gravel throated delivery down pat. There is no denying that this CD came from the seventies, it has that dated sound to it – think Whitford/St.Holmes. Keyboards played a larger role in Let It Roll than it did on the band’s follow-up releases, resulting in this sounding more like bar-band mainstream rock as opposed to the heavier brand of music they would later perform.”

Of note, Rock Candy Records has recently re-issued all three of TKO‘s studio albums and has included bonus tracks with each album.