Very sad news as current Juggernaught frontman and former L.A. Cobra lead guitarist Herman Le Roux passed away a few days ago. The cause of death for the South African guitarist is not confirmed at this time. Le Roux played lead guitar in L.A. Cobra back in 2008 and 2009. Juggernaught released four albums — Act of Goat (2008), Brown Pleather EP (2011), Bring The Meat Back (2012) and Full Grown Woman (2016) — with Le Roux as lead vocalist and guitarist. 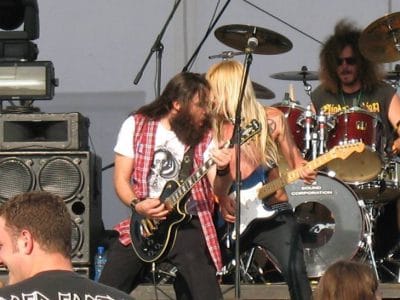 Speaking exclusively to Sleaze Roxx, L.A. Cobra founder and frontman Don Cobra indicated the following: “We were in the process of writing an album with him in 2008, prior to How Much Snake Can You Take? [released in 2010] but we never finished it as he was also in another band at the time, which was his main band called Juggernaught until today. Actually, they are very popular in South America. We have one rough demo of a song called “Monster” that we recorded with him. He mostly wrote that.  We want to release it on YouTube as a tribute to him in the next few days to come as soon as the dust settles a bit.”

“With a heavy heart we have to greet our brother Herman Le Roux, former L.A. Cobra lead guitarist (2008/09) and brainchild behind L.A. Cobra.

You ARE an inspiration to us all, we’re the spawn of your creativity. You will forever live in our hearts Herman.

You have no idea how you will be missed and all the lives you’ve touched.

Sail into the stars, until we meet again….

L.A. Cobra features in TV commercial for UK based company, Polycell.Commercial was broadcast for 2 years in United Kingdom and Europe.https://facebook.com.la…