Guitarist Mick Zane (also known as Michael Landauer), one of the founding members of ’80s heavy metal band Malice, has passed away. 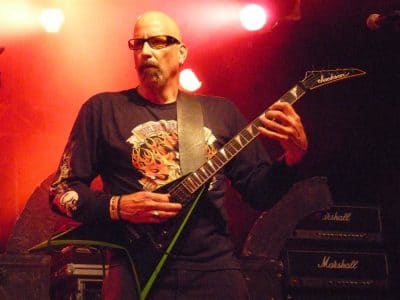 As per Blabbermouth, Zane was diagnosed with a brain tumour back in late 2014 and underwent brain surgery at that time. Blabbermouth later reported in January 2016 that Zane was undergoing cancer treatments to battle an inoperable brain tumour.

“With two Metal Massacre tracks and a major label contract under their belts, the Los Angeles (by way of Portland, Oregon) band Malice seemed destined for stardom. The band had a strong Judas Priest influence, thanks in no small part to James Neal‘s standout vocals, and their style seemed tailor-made for the growing 80’s metal scene. For whatever reason, though, the band never made it to the upper echelon of metal, their two albums for Atlantic Records garnering respectable reviews and fan support but never pushing them over the edge. After being dropped from Atlantic, a final EP was released on Metal Blade Records and after that the band disappeared, not to be heard from again for well over a decade. In October 2006 came word that the band was back in action, featuring three of the original five along with a new drummer and vocalist. Several years after that the lineup stabilized, and with respected new singer James Rivera at the mic, the long-awaited comeback album, New Breed Of Godz, was released in 2012.”