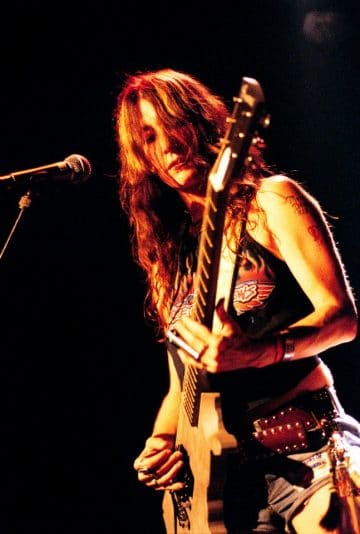 Sad news as Raging Slab‘s co-founding member and guitarist Elyse Steinman passed away on March 30, 2017 after a three year battle with cancer.

“It is with profound sadness that I announce the passing of Elyse Steinman. She died on Thursday, March 30th after a three year battle with cancer. I laid her to rest that evening at a natural burial ground in Washington state as the sun was setting over the Columbia river gorge. Thank you everybody for all the love and support you showed throughout her illness, and please know that; as much as you loved her, she loved you all back just a little bit more. Peace and Love. Greg“

Wikipedia states the following in part about Raging Slab‘s beginnings:

“The group formed in 1983 when Greg Strzempka and Elyse Steinman, both guitarists, met in New York City. The two had a shared interest in the heavy rock sounds of 1970’s style “boogie” rock and such contemporary punk rock groups as the Ramones and Black Flag. The couple enlisted the services of drummer Kory Clarke (Warrior Soul and Space Age Playboys) as well as a third guitarist, Dmitri Brill (Super DJ Dmitri from Deee-Lite), and the nascent boogie group began playing their first shows in Manhattan’s Lower East Side rock clubs. 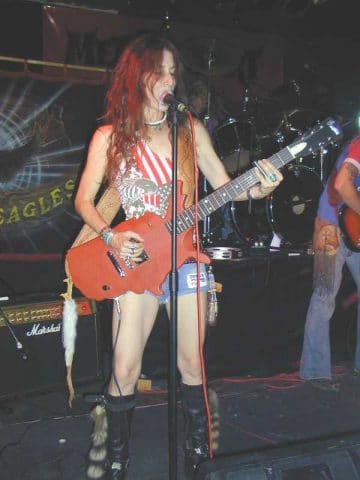 By 1986 the group had gone through several personnel changes, and both Clarke and Brill had departed, but the line-up solidified somewhat with the addition of Alec Morton on bass guitar. The group began to build a steady and loyal following around the New York City and New Jersey area, playing many shows with the Butthole Surfers and also with Strzempka and Steinman‘s then next-door neighbours, White Zombie. Ultimately the band would utilize the talents of over twenty different drummers, including former Whiplash drummer Tony Scaglione, Black Label Society co-founder Phil Ondich, Monster Magnet/Riotgod drummer Bob Pantella, and New Orleans native Rob Cournoyer, before finding Backdraft drummer Niklas Matsson to fill out the line up.

In 1987 the group recorded their first album, Assmaster, released on the New Jersey based punk label Buy Our Records. The cover art was executed by Marvel Comics artists Pat Redding and Pete Ciccone, and Raging Slab began to tour across the United States. In 1988 Steinman and Strzempka decide to add a third guitarist, Mark Middleton, and the group released their second album, True Death.

By 1989 several major labels were bidding to sign Raging Slab, and ultimately it was RCA Records that attracted the band to sign a multi-record contract. The group recorded their eponymous third album Raging Slab, produced by Daniel Rey (Iggy Pop, The Ramones, Masters of Reality). To help support this album the group also produced a video, and the clip for their song “Don’t Dog Me” featured the band being dragged around the Mojave Desert by a monster truck. The video climbed to No. 2 on the MTV countdown….”

from their self titled debut