Def Leppard guitarist Steve Clark passed away 30 years ago. He would have been 60 years old today if he was still alive.

Below is the Sleaze Roxx article from its now defunct R.I.P. section in that regard 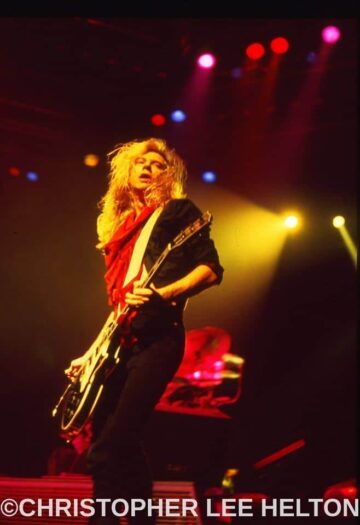 Details:
LONDON – Steve Clark, guitarist with the heavy metal band Def Leppard, died of a lethal combonation of alcohol and drugs after a night of heavy drinking, a London coroner ruled today.

The 30-year-old guitarist was found dead the morning of Jan 8 at this London home.

Daniel Van Alphen, Clark’s drinking companion the night before, testified that the two went to the local pub and returned to the guitarist’s home at midnight to watch a video.

Van Alphen said Clark drank a triple vodka, a quadruple vodka and a double brandy within 30 minutes. When Clark passed out on the couch, Van Alphen said he left.

Clark, who reportedly earned $28 million a year according to a 1989 American survey, was found dead in his home in London’s upscale Chelsea neighborhood by his girlfriend Janie Dean.

Dr. Iain West, the pathologist who performed the autopsy, testified that Clark’s blood alcohol level was three times the British legal limit and an antidepressant drug and a painkiller were both found at levels exceeding normal therapeutic doses.

He said valium was detected at normal levels.

Def Leppard‘s “Pour Some Sugar On Me” video (from Hysteria album):