R.I.P. — Remembering Mark St. John on the 11th year anniversary of his death

Today marks 11 years since former KISS and White Tiger guitarist Mark St. John passed away. Below is the Sleaze Roxx article from its now defunct R.I.P. section in that regard:

By this point, KISS had done away with its trademark makeup and costumes, but the group was enjoying a career renaissance. The lone KISS album on which St. John appeared, “Animalize,” re-established the group as one of the world’s top arena metal bands. The album spawned the popular MTV video, “Heaven’s on Fire” (the only KISS video to feature St. John). 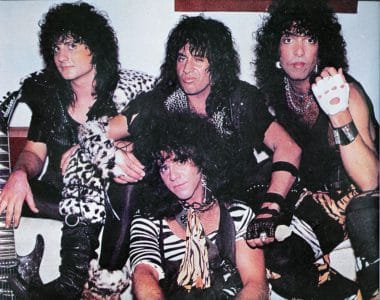 St. John‘s flashy playing reflected the era’s Van Halen-influenced rock guitarists, but it certainly helped spark the material on “Animalize,” which many fans consider one of KISS’ strongest non-makeup releases. However, right around the time KISS was to launch a worldwide tour in support of the album, St. John was diagnosed with a form of arthritis called Reiter’s Syndrome, which caused his hands and arms to swell, and prevented him from playing guitar.

Guitarist Bruce Kulick filled in (St. John did manage to play one full show with the group, and portions of a few others) and eventually replaced St. John as KISS‘ permanent guitarist.

His medical condition improved after leaving KISS, and St. John launched a pop/metal outfit, White Tiger, with ex-Black Sabbath singer David Donato. St. John briefly teamed up with original KISS drummer Peter Criss in a group that didn’t release any recordings, and appeared as a guest speaker at KISS conventions. In 2001, he released an all-instrumental album, “Magic Bullet Theory.”

“I wish to express my sympathy to Mark St. John‘s family and friends,” Kulick said in a statement. “Though Mark was the guitarist I replaced, I respected his talent and contribution to KISS. May he rest in peace.”