Slave Raider bassist Letitia Rae has announced via a Facebook post yesterday that her bandmate / guitarist Nicci Wikkid (also known as David Huffman) has passed away. 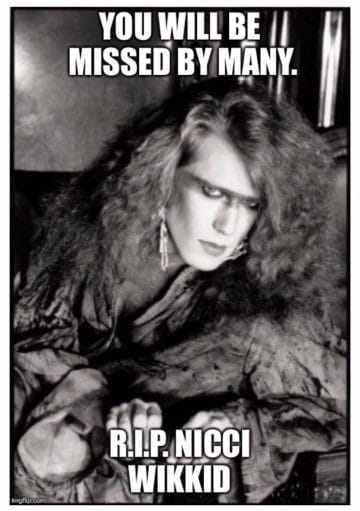 Huffman had reportedly been diagnosed with terminal lung cancer earlier this year.

Wikipedia states the following about Slave Raider (with slight edits):

“Slave Raider was an American heavy metal band formed in 1985 that was known for its over-the-top antics, heavy make-up and glam song lyrics. In the Twin Cities, Slave Raider had a sizeable following that were known as “The Raid”. They opened for such 1980s bands as Ratt and Poison with the original lineup.

The lead singer, Mike Findling, performed under the persona Chainsaw Caine (wielding and operating a chainsaw on stage as part of the act). Due to an injury in his youth he had a wandering eye that he felt was a distraction to the audience when he performed, so he began to wear an eye patch. As eye patches are often associated with pirates, the band took the name “Slave Raider” from the history of pirate lore. Other members of the band performed under the names Lance Sabin (guitar), Nicci Wikked (guitar), Letitia Rae (bass), and Rock (drums)….

The band recorded three albums in the late 1980s and early 1990s, but were never able to make much of a dent in the glam metal scene of the time due to the beginning of the grunge movement that has been attributed to the influence of their fellow Minnesotans, the Replacements.

The band was dropped by its record label following their third album release in 1990 and broke up soon after that with the band members going on to solo projects, with front man Chainsaw Caine forming the band U.K.I. (The Unstoppable Kamikazee Idiots). The original line up has periodically reunited since then to perform the occasional reunion show that is always “standing room only”.”