Sad news as Swedish rockers, The Black Marbles, are calling it quits after a run that started in 2009. The Black Marbles had just released a seven song album titled Moving Mountains back in early December 2017.

The following message was posted on The Black Marbles‘ Facebook page earlier today: 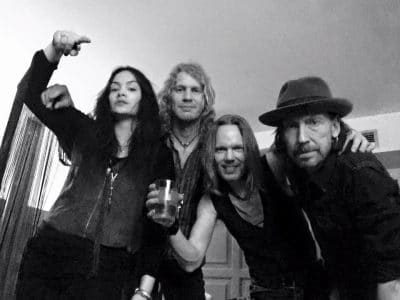 “We’re sorry to say that there will be no more chapters written in the book of the Black Marbles. We’ve had one hell of a ride since the band started back in 2009. We shared stage with great bands, we met so many friendly people and we made a couple of pretty decent albums and an EP.

It has not always been easy, but one things for sure. We don’t regret a second of all the time we spent on stage, all around Europe. We put a lot of work into arranging our songs, rehearsing our live set and even our image, just to be sure we delivered 100% all the time, whether it was in the studio or in a live situation.

Now, we are focusing on other things, important stuff that life usually has to offer at one time or another, but music will always be there and you will see us in different projects and constellations in the future for sure. There are still vinyls and CD’s of our albums available and the webshop will be open if you missed to secure a copy. With that said all we can say now is…. THANK YOU!

Sleaze Roxx stated the following in its review of The Black Marbles‘ full-length album Made In Concrete, which was released back in 2013: “The headline on The Black Marbles‘ Facebook page claims they are ‘classic rock with groove, energy, heart & soul’, and fortunately for me it’s every bit true. This is my first exposure this unique Swedish band and noticing that they list their influences as Bad Company, Free, Humble Pie, Faces, and the Rolling Stones, it’s easy to see where these guys get their motivation on these songs from.”

The Black Marbles – Free Your Mind

The song Free Your Mind from upcoming debutalbum ‘Made In Concrete’. The Black Marbles is from Gothenburg, Sweden and features members from the Awesome Machi…