Sad news to report as former UFO, Lone Star and Killer Bee guitarist Paul William “Tonka” Chapman has passed away at the age of 66. Chapman played on a number of UFO albums in the early ’80s and on Killer Bee‘s Eye In The Sky record in 2016.

Wikipedia states the following about Chapman‘s time in UFO (with slight edits): 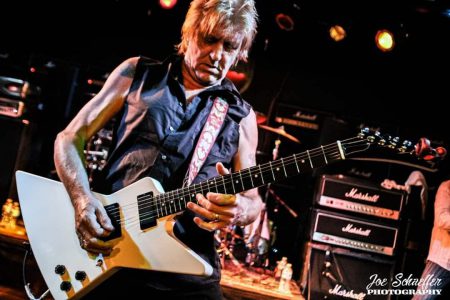 “Chapman first joined UFO in 1974 as a second guitarist to augment their live sound having answered an advert in UK’s music paper, Melody Maker. He auditioned at the Unity Theatre in London. Although Chapman did not record an album during this period, he did join in time to tour and promote the Phenomenon album. However, he can be heard with the band on several tracks on the BBC live sessions album that was released retrospectively. He left UFO in January 1975 due to personal differences with the band, and went on to form Lone Star, where he remained until June 1978.

In 1977, he filled in for Michael Schenker in UFO when they were on tour with Rush in the United States during one of the German guitarist’s absences.

After resuming with Lone Star following the tour, Chapman later rejoined UFO in December 1978 on a full-time basis after Schenker and UFO parted company. By this time, UFO were an international success, and were about to release their live album, Strangers In the Night which would increase their profile even further. Chapman is acknowledged on the album.

Chapman recorded his first album with UFO – No Place To Run – with ex-Beatles producer George Martin; which was released in January 1980. UFO undertook a tour to promote it culminating in a five night sell out at London’s Hammersmith Odeon.

Chapman remained in UFO until 1983 and played on another three albums, The Wild, The Willing And The Innocent (1981); Mechanix (1982); and Making Contact. In 1983, after numerous line-up changes, UFO decided to call it a day and the tour was promoted as a farewell tour (although they subsequently reformed the following year). UFO released a compilation album later that year incorporating songs featuring various of their members in other bands. Chapman was represented by a Lone Star song. The album was completed by several songs recorded live on the farewell tour.”

UFO‘s No Place To Run song (from Headstone: Live At Hammersmith 1983 album):