“Van Halen and his brother Alex formed a band in 1972. Two years later, the band changed its name to “Van Halen” and, at the same time, became a staple of the Los Angeles music scene while playing at well-known clubs like the Whisky A Go Go. In 1977, Warner Records offered Van Halen a recording contract.

Upon its release, the band’s album Van Halen reached number 19 on the Billboard pop music charts, becoming one of rock’s most commercially successful debuts. It was highly regarded as both a heavy metal and hard rock album. By the early 1980s, Van Halen was one of the most successful rock acts of the time. The album 1984 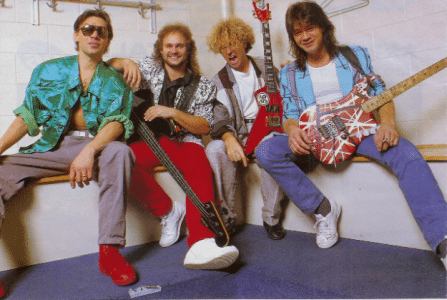 went five-times platinum a year after its release. The lead single “Jump” became the band’s first and only number-one pop hit and garnered them a Grammy nomination.

The band won the 1992 Grammy Award for Best Hard Rock Performance with Vocals for the album For Unlawful Carnal Knowledge. In 2019, the band ranked 20th on the RIAA list of best-selling artists with 56 million album sales in the United States and more than 80 million worldwide. Additionally, Van Halen charted 13 number-one hits in the history of Billboard‘s Mainstream Rock chart. VH1 ranked the band seventh on a list of the top 100 hard rock artists of all time. In January 2007, Van Halen was inducted into the Rock and Roll Hall of Fame. Individually, Eddie received acclaim for his guitar work in the band.”

Van Halen‘s “Finish What Ya Started” video (from OU812 album):

The outpouring of love for Eddie Van Halen has been expected but still very moving. Former and current Van Halen members have posted comments via their respective Facebook pages.

David Lee Roth: “What a Long Great Trip It’s Been..”

Sammy Hagar: “Heartbroken and speechless. My love to the family.”

Michael Anthony: “No words. Heartbroken. My love to the family.

Wolfgang Van Halen: “I can’t believe I’m having to write this, but my father, Edward Lodewijk Van Halen, has lost his long and arduous battle with cancer this morning.

He was the best father I could ever ask for. Every moment I’ve shared with him on and off stage was a gift.

My heart is broken and I don’t think I’ll ever fully recover from this loss.