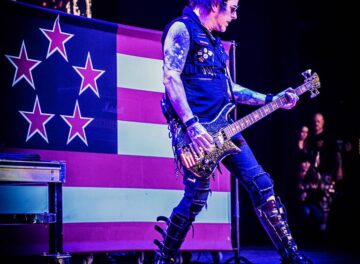 Skid Row bassist Rachel Bolan and new lead vocalist Erik Grõnwall were recently interviewed by Guy Shankland for Fistful of Metal‘s Issue #8, which features a two collectable cover special with Machine Head and Amon Amarth. The Skid Row article / interview is titled Back To The Grind. 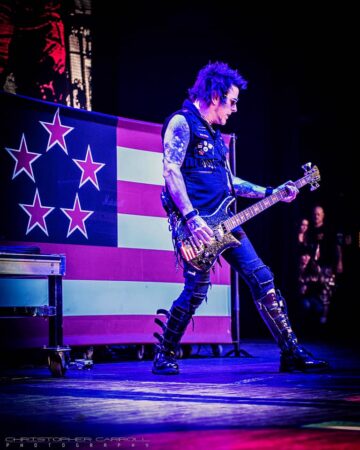 There is no question that Grönwall‘s arrival in Skid Row has breathed new life into the band. The endless inquiries on when the Skid Row members would be reuniting with former singer Sebastian Bach seems to have dissipated and there seems to be great anticipation for the group’s upcoming new studio album The Gang’s All Here, which is slated to be released via earMUSIC on October 14, 2022.

Grönwall was officially announced as Skid Row‘s new lead vocalist in late March 2022. In terms of his time in the band, Grönwall indicated: “Yesterday, when I was in bed, I was thinking, how long have I been in this band? April, May two months what the f… It’s mad, but I was trying to be as in the moment as possible and not think about the reaction of the audience. I was just focused on singing the best I could and being the best performer I could be while also trying to figure out the rest of the guys on stage and getting to know each other on stage. We rehearsed twice before the first show. We were in a room together five days before the first show. When I look back on it, I think we did a great job together, and now it’s getting better with every show we do.”

Bolan added: “We actually met face to face on a Tuesday, rehearsed Wednesday and Thursday, then played live on the Saturday. Other than that, Eric had recorded most of the record; Eric had two more songs to go, which he finished while we were in Las Vegas. So yeah, processing is an understatement, but everything fell into place, and everyone feels really comfortable around each other, both off and on stage. Offstage is probably more important. We all vibe and have fun together, and it’s rare when you get five like-minded guys, and now we are.” 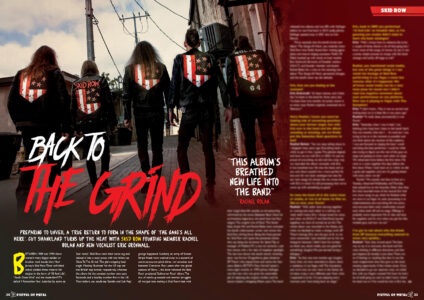 In terms of how Skid Row have weathered the changes in the music industry from colossal record contracts and advances to a more “do it yourself” mode, Bolan opined: “Well, I think it starts out with who you are as a person, and all the guys in the band come from blue-collar backgrounds. I come from a long line of do-it-yourselfers. My dad was a builder; my mom worked as a school secretary, our dad built our house, and my brother’s a mechanic. As people, we have the mindset that things aren’t always going to be up here, and sometime it’ll be down here. The goal is then to get back up there, and it may be hard, and it may be long, and it was. But you have to strive and keep realistic goals, and that’s kind of how Skid Row thinks. Over the last twenty-seven years, we’ve played a lot of places we probably shouldn’t have, but at least we got to play. We take a lot of pride in what we do. I always say, don’t send Skid Row out on stage with a chip on their shoulder because they’re gonna tear shit up! That’s what we do to weather the storm as a band; I mean, when grunge came in, it stuck us all on the unemployment line. Then thankfully, time came around, and 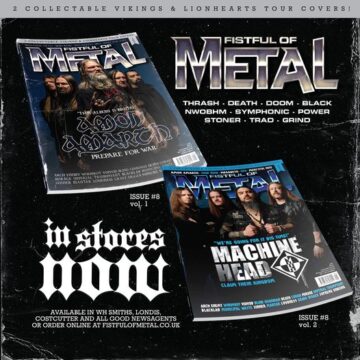 nostalgia came into play, and we’re just one of those bands with a ‘don’t give up; attitude. We just keep plugging along, man, and now it’s paying dividends with Eric joining; it’s all really great, and for a dude my age and for as long as we’ve been around, it’s a really cool thing to have.”

With respect to whether it is still viable to make a living as a musician these days (and with Shankland emphasizing that the question was asked with the greatest respect), Bolan stated: “No, no, I get it, absolutely. People have this misconception that everyone in the band is broke, and we’re not. We had some massive songs, which I guess they forgot about, and we sold nearly twenty-three million records (laughing), so we’re not broke by any means. I heard some woman say, ‘Oh, they live in tents’, and I’m like ‘Okay I’ve got a couple of tents, one in Jersey and one down in Atlantic City, and they’re nice tents, y’know?’ We never had to go back to day jobs, the albums keep selling, and we make good money on the road. That’s another misconception that we play for peanuts; it’s a lot of peanuts (laughing). Don’t slip on the fucking shells!”

You can read the rest of the interview with Bolan and Grõnwall by picking up Fistful of Metal‘s Issue #8, which can be purchased via the magazine’s website.