Radio Exile have released a video for their song “Soulfire” from their self-titled debut album, which was released back on October 23, 2015. 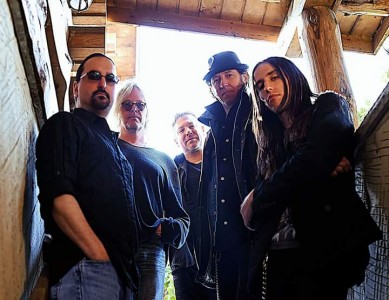 Calv advised the following about what made the band decide to go with “Soulfire” as the second single and video: “We were originally looking at another song and then we started talking about concepts for videos, and we really wanted to do something that was a little bit different and more of an artistic statement this time around instead of the band just basically playing. So once we had an idea of what we wanted to do, ‘Soulfire’ just made complete sense, and when you see the video, you will understand how that idea would not have worked with any of the other tracks.”

Mogel was asked what was the idea behind the video for “Soulfire” and stated: “The idea came about as Charlie had found this guy RicKy Syers, a puppeteer, who has a bunch of viral videos out featuring his puppets. We wanted to do something different for the next video, so we thought it would be cool to implement that, along with a very cool Vaudeville theme – literally across the street from where RicKy lives – at Roxy & Duke’s Roadhouse, a one of a kind place, in New Jersey [USA]. So ‘Soulfire’ boasts a whole gaggle of characters between the puppets and the performers and I believe we pulled it off correctly! It’s a really fun video to watch.”