Radio Exile featuring Chandler Mogel on lead vocals, Charlie Calv on keyboards, Jimmy Leahey on guitar, Dave Anthony on drums and new member Mike LePond on bass have signed with Mighty Music and will be delivering the follow up to their self-titled debut album in 2019. 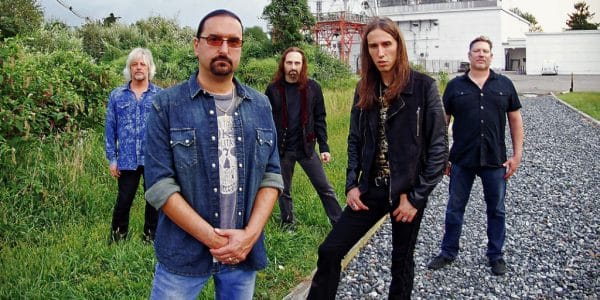 “Mighty Music is extremely proud to announce the signing of US rockers Radio Exile. The band that released their self-titled debut album in 2015 to critical acclaim by both press and fans went on a hiatus for almost four years due to other commitments of their members. But now they’re back, renewed with the recruitment of Symphony X bass player Mike LePond.

Charlie Calv, Radio Exile‘s keyboardist, states: “Radio Exile is thrilled to join the Mighty Music roster and we can’t wait for people to hear the new record. I have had the pleasure of working with Michael over the past year on some other projects and we felt this would be the perfect home for Radio Exile. Chandler, Jimmy, Mike, Dave and I are hard at work finishing up the record and we look forward to getting this out in 2019!”

Michael H. Andersen, Mighty Music CEO, adds: “I instantly fell in love with the music of Radio Exile the first time Charlie introduced me to their debut album. This band is the real deal if you’re into proper melodic US rock and a signing to Mighty Music truly from the heart. I look forward to spending more time in NYC with these guys in 2019″.

Individually, the musicians that originally came together to form Radio Exile perform on stage or in the studio with the greatest artists of our time. This list includes Paul McCartney, Bob Dylan, Hall and Oates, Allison Krauss, Billy Idol, John Waite, members of Pink Floyd, Styx, Journey, Angel, Van Halen, the Rolling Stones, and Black Sabbath.

Radio Exile released their self-titled debut CD in 2015 which was called “an epic of classic rock”, “an instant timeless classic” and “a real masterpiece”. Vocalist Chandler Mogel and keyboardist Charlie Calv were introduced by mutual friend and future Radio Exile drummer Dave Anthony, the two immediately hit it off and became the songwriting team behind this unique new group. Add to that, the stellar guitar work of Jimmy Leahey and the legendary bass of Kenny Aaronson and Radio Exile seemed to be on its way.

Now after almost four years and the addition of Symphony X bassist Mike LePond replacing Kenny, the band’s long-awaited sophomore effort is set to be released in 2019.

The band has 10 brand new scorching tracks including «Savior» and «Mission Bells», produced this time around by Charlie Calv and engineered and mixed by Brian J. Anthony (Steve Walsh, Drive She Said, etc…). Additional mixing is being handled by the legendary Neil Kernon (Queensryche, Dokken, Kansas, etc…) with mastering again by Alan Douches (Fleetwood Mac, Yes, Pete Townsend, etc…) at his West West Side Music facility.

This new album sees Radio Exile getting more focused and delivering a huge slab of hard rock with rocking guitars, swirling keyboards, moving rhythms, and soaring vocals. This will not disappoint existing fans and is sure to gain a whole new generation of fans who will be wanting more.”

Radio Exile‘s “No Pity On The Highway” video: