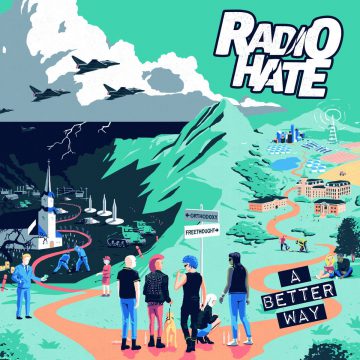 “After Abort! Abort! dissolved in 2006, with no way to escape the addictive punk rock sound, singer Matt Victim continued to write songs, drawing on influences ranging from Streetpunk/Oi! Classics such as Cock Sparrer, Blitz, and The Blood; to 90’s punk bands like Oxymoron and Rancid; to innumerable bands in a wide range for genres including Thin Lizzy, The Who, The Sounds, and The Murder City Devils.

Eventually, he established Rocket Vault Studios and went on to record two solo albums under the Radio Hate project name.

The call for live shows grew louder and the search began for members to fill out the band. A motley group of veterans of the Wisconsin punk scene answered the call, and now Radio Hate is hitting Midwest stages (and soon beyond!) with an energetic live show of catchy, smart, and powerful punk anthems – ready for you to sing along!”