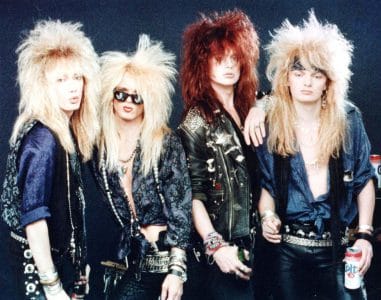 “Released this month by Dai Hard Records is the debut album from Ragdolls, a punk-tinged glam band from Cardiff, UK, that formed in the spring of 1988, split up a few short years later and yet somehow, 30 years on, are back with Old Habits Die Hard.

Born in one of the countless microcosms that spun up around the world in response to the explosion of excess that was LA’s Sunset Strip in the mid-1980s, Ragdolls cut a flamboyant figure on the UK rock scene before changing tastes at the turn of the decade brought all things glam crashing down.

In the intervening years the boys in the band got on with their lives before the reuniting effects of modern social media brought them back together and the crazy idea of actually cutting the album they never got the chance to make became a reality.

Old Habits Die Hard is a mix of glam anthems that harken back to the scene’s heyday and material with a tougher 21st century bite. Recorded and produced by Ragdolls themselves at Cardiff’s Studio10 Music and released on the band’s own label, Dai Hard Records, the album is available from March 1st as a CD from Ragdolls‘ website or from iTunes, Spotify, Amazon and all major digital outlets.”

“The mid-1980s were a colourful, joyfully explosive time in hard rock circles and the huge-haired, tight-trousered boys of LA’s Sunset Strip dominated the scene. Any band that could pull on a pair of cowboy boots and empty an entire can of Aquanet onto their backcombed barnets became the darlings of the music industry and were snapped up by record labels eager to find the next big thing.#Although the epicenter of this rock-quake was distinctly Californian, its shockwaves were felt globally and pretenders to the party-hardy, good-time glam throne that were less geographically fortunate banded together in the unlikeliest of locations to form microcosms of the Sunset Scene.

5,000 miles east of Los Angeles, in Wales’ capital city of Cardiff, one such scene blossomed. Its focus was Bogeys Rock Club (later renamed New Bogiez, ‘cos everything was better in the ’80s when spelt with a ‘z’). Cardiff’s answer to the Whisky a Go Go saw many an aspiring metal/glam/sleaze/call-it-what-you-will band tread its boards before the club’s ignominious decline and its ultimate reduction to rubble in the 1990s as part of Cardiff‘s city centre redevelopment.

For a few glorious years though, Bogeys nurtured a fistful of young and hungry bands that owed their spiritual allegiances to the Los Angeles pretty boys and Ragdolls was one of them. 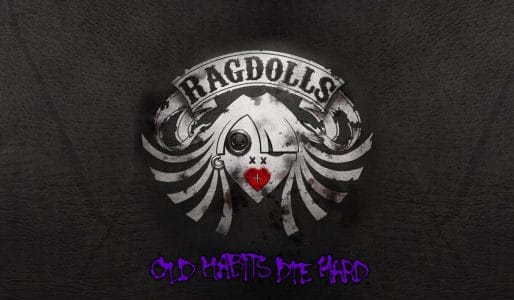 Before Ragdolls were forged in the Bogeys rock crucible, the members of the band had cut their teeth in a number of unremarkable local outfits including China White and the unfortunately-monikered Rock Bottom. Ragdolls’ drummer, Jamie Kayne, had been an original member of Tigertailz, arguably the only band to emerge from the Cardiff scene at the time who achieved any measure of real success – their sophomore release, Bezerk, puncturing the UK’s Top 40 album chart in 1990.

Bass player Marc Kelly had rehearsed with Tigertailz as rhythm guitarist briefly so he and Jamie had a history. Jamie was putting a new band together with vocalist JJ Cruise and gave Marc a call. Bonding over a love of 1970s US pop-tinged hard rock outfits like Cheap Trick and Starz (there’s that ‘z’ again), the fledging Ragdolls set about recruiting a lead guitarist.

Marc had played in a high school band with David Ryder Prangley, who went on to front ’90s alt-rockers Rachel Stamp, and David introduced Marc to college-mate, Mike Dollz, and so in the spring of 1988, Ragdolls were born.

True to the spirit of the times, the band had their first professional photo shoot before they ever played live. That’s not to say they didn’t take the music seriously and had hammered a tight set of punk-tinged glam anthems (glamthems?) together in time for their live debut in June 1988 at Edwards No8 in Birmingham. Yes, Ragdolls first show was away from their home town and a partisan crowd. A wise move in hindsight, since it gave the band the opportunity to iron out the kinks before bringing their show home to the beloved Bogeys.

As is often the case, the first few songs Ragdolls wrote turned out to be amongst their most memorable and hard-wearing. Bullet With Your Name On, Doll House and Mad, Bad and Dangerous To Know were numbers written as the band refined their style and honed their chops. It was those three tracks that were recorded at Cardiff’s Music Factory studios in 1989 as the Attitude with a Capital ‘A’ demos which were subsequently touted round UK record labels and management companies in the hope of securing the band a deal.

Attitude also landed on the desk of BBC DJ Tommy Vance who hosted the legendary Friday Rock Rock on Radio 1 and the band found themselves competing in the show’s Rock Wars with a BBC radio session as the ultimate prize. Although Ragdolls made it through the opening round, they lost out by just five votes in the final and the subsequent fallout of that disappointment meant a lineup change was on the cards. 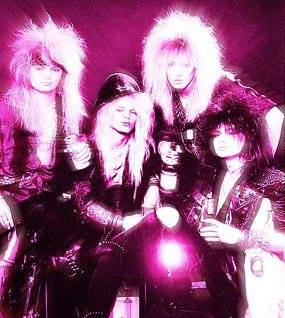 Robin Guy joined Ragdolls as their new drummer in late 1990 as a fresh-faced 19 year old and in the years since has gone on to become one of the most versatile and respected tub-thumpers in the UK, playing with more bands and individual musicians that there’s space to accommodate here.

Re-energized by Robin’s arrival, the band continued gigging around the country, playing London’s legendary Marquee Club and hosting a record label showcase at Nomis studios. They also appeared on MTV’s Headbangers Ball and recorded two new songs, White Knuckle Ride and Addicted for ITV’s Raw Power. However, between the recording of those tracks and the filming of the accompanying performance videos, Mike Dollz left the band. Mike’s departure could be blamed on the hoary old chestnut that is ‘musical differences’ but with hindsight perhaps the perceptible shift in the weather blowing in from Seattle at the start of the 1990s was equally to blame. Grunge went on to sink the careers of many established and successful ‘80s good time bands and it seemed to the boys the the ’Dolls that whatever chances they may have had to break through had vanished by the turn of the decade.

The doors closed forever on the Doll House in November 1991. Or so it seemed…

How, by all the High-Haired Gods of Glam, did that happen?

Both Jamie Kayne and Mike Dollz continued to play music in the years following Ragdolls’ demise, albeit of a different stripe to the punky glam anthems of yore, and it was Mike’s interest in preserving for posterity the music of Ragdolls that lead him to set up a My Space page for the band in 2008 and a Facebook page followed not long after. That page came to the attention of FnA Records, a label specializing in unreleased and hard-to-find rock and metal music from the ‘80s and ’90s. FnA suggested the band might like to assemble an album’s worth of material made up of old demos and live recordings for the label to release.

Mike reached out to Marc Kelly who by this time was living in Los Angeles and together they trawled through the Ragdolls archives.

It swiftly became apparent that what they found wasn’t worthy of an album release but it did excite the pair of them and the prospect of making new recordings was entertained. It’s safe to say things snowballed wildly to the point where old songs were dusted off and brand new tunes written, with Marc contributing lyrics and bass from LA as Mike, Jamie and JJ recorded the rest of what would become Old Habits Die Hard at Studio 10 Music in Cardiff. Despite the motivating interest shown by FnA, Ragdolls made the decision to record and release Old Habits Die Hard on their own label, creating Dai Hard Records for that purpose in order to maintain creative control of the music and how it would be presented.

When asked what, after all this time, motivated Ragdolls to reunite and release a debut album 30 years in the making, Marc Kelly replied, “If all that happens as a result of making this album is that a stripper in some Alabama trucker dive bar decides to take her clothes off to Doll House one night instead of Girls, Girls, Girls, then it was entirely worth it.”