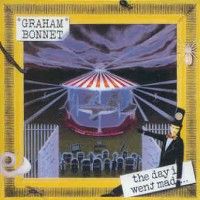 Voiceprint Records (www.voiceprint.co.uk) is re-issuing former Rainbow vocalist Graham Bonnet’s solo albums “Underground” and “The Day I Went Mad”. Some new photos have replaced the original ones in the “Mad” CD jacket. Those who have searched for these CDs, don’t miss this chance to get one from Voiceprint or your local retailers!

Graham Bonnet is considered one of the finest Rock vocalists of his generation. Beginning his career in the sixties Graham was one half of the pop duo The Marbles who scored a worldwide hit single with the Bee Gees written song Only One Woman. Following on from the Marbles Graham embarked on a solo career in the seventies and was one of the first signings to former Beatle Ringo Starr’s record label Ringo records. Following one self titled album Graham was approached to replace Ronnie James Dio in Rainbow. Graham featured on the album Down To Earth and also the hit singles Since You’ve Been Gone and All Night Long before he left Rainbow in late 1980 following Rainbow’s performance at the first Monsters of Rock festival at Donnington.

Graham then recorded his third solo album Line Up which featured many guest artists such as Cozy Powell and Micky Moody. The album also spawned the hit single Night Games which became a staple of Rock radio stations worldwide. Following the release of Line Up Graham then joined the Michael Schenker Group recording just one album entitled Assault Attack and the hit single Dancer.

Graham then formed his own American based rock band Alcatrazz with whom he would record three studio albums and a live album. Graham left Alcatrazz in 1987 when the band folded and he picked up his solo career once more which has continued to this day.

The Day I Went Mad was originally recorded and released in 1999 in Japan and includes performances from a wealth of special guests including g Slash, Vivian Campbell, Danny Johnson, Bruce Kulick, Tim Bogert, Tony Franklin and Kevin Valentine. The album also includes the tracks, The day I Went Mad, Oh Darling, This Day, Flying Not Falling and Spiked.