Christian hard rockers Rainforce have released a lyric video for their new song “Rock And Roll” from their upcoming EP, which will be released via Roxx Records on March 22, 2019. 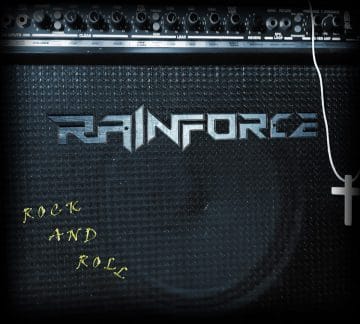 “‘Rock And Roll’ is the thunderous new single by Swiss/international hard rock band Rainforce. This song is also the title track off of the bands upcoming brand new EP due this spring. Roxx Records has scheduled the release of the new EP for March 22, 2019 featuring 4 brand new hard rockin’ tunes on a limited edition CD format.  After the debut album ‘Lion’s Den’ released in 2017, this is the second strike for hard rockers Rainforce with the band releasing their debut album ‘Lion’s Den’ also on Roxx Records back in 2017.

This time, the band has plans to start getting out on the live circuit and start to really hone in on their live show experience playing around Europe.

The track ‘Rock And Roll’ features many song- and album titles of bands who have helped inspire guitarist and songwriter Andy La Morte since he started to listen to rock and metal music. The song is meant to pay homage to all of these great bands that have helped shape the music and sound of Andy and Rainforce. It is also a statement on their uncompromising faith in Christ throughout the highs and lows of life.

Following a Rainforce tradition, this song also features a guest guitar player by way of Marc Burgherr, who has been a long-time friend of Andy’s and visited the band in the studio to lay down some cool guitar riffs for the band.