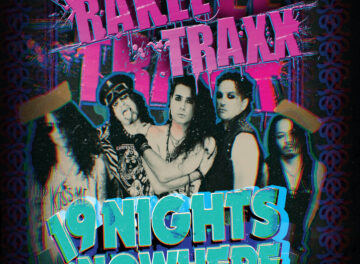 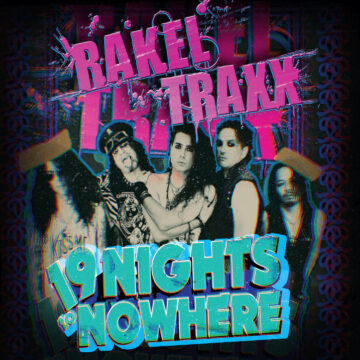 “Rakel Traxx is more than a band, it’s a bunch of friends, hanging out together since they were kids and for whom Sex, Drugs & Rock n’Roll is not just sentence but a real credo. The band started in Marseille (French riviera), their hometown, where they used to mess around in the few clubs & bars.

One of these nights, they decided to create Rakel Traxx, a Sleaze rock band tainted with punk & metal, as a tribute to LA’s 1980 glam scene.

In 2008, they record their first EP and hit the road in France and Europe with bands as Hardcore Superstar, Pretty Boy Floyd, Adam Bomb, Gemini Five, BlackRain and Dagoba.

Their shows are a precise mix of raw energy and glitters, their live reputation is no longer to be made, and fans are already asking for more, they simply rock the stage out.

In 2010, the band is back in studio for their first album “Bitches Palace” released on Shotgun Generation Records in 2011.

This album will, without a doubt, write their name within the sleaze rock legends. They hit the road with the Swedish bad boys of Sister, in Germany, Belgium, Italy and France.

In 2016, Rakel Traxx is back with a new album “Dirty Dolls“, which will be released on Shotgun Generation Records. They won the “Voice of Hell” and will play at Hellfest in 2017, they continue to burn the road in France and Italy again.

In 2020, they’ll be back after a short hiatus, during the lockdown due to the worldwide pandemic situation, they have recorded an EP “19 Nights To Nowhere” which will be released via Rock City Music Label on September 9th on all digital platforms.

Rakel Traxx is back and ready to kick some fuckin’ ass !!”