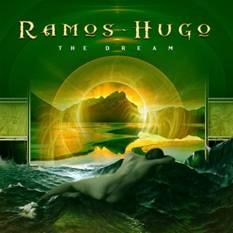 RAMOS/HUGO TO RELEASE ‘THE DREAM’ IN OCTOBER:

Frontiers Records is excited to announce the release of the debut album from the highly anticipated new Melodic Rock union between Josh RAMOS and HUGO entitled “The Dream” on October 10th 2008.

On the heels of his successful RAMOS debut solo album “Living In The Light”, Josh Ramos, former guitar player of THE STORM and TWO FIRES and now shredder for HARDLINE, started looking for a new suitable vocal partner who could offer his songs the right, heavenly and soaring element that could sparkle them to the next level. The opportunity came through when the amazing Hugo, well known solo artist and former singer of OPEN SKYZ and VALENTINE, accepted the invitation to come and work on the vocal melodies and sing on the new songs.

Hugo and Josh therefore teamed up with famed bassist and producer Fabrizio Grossi (Glenn Hughes, in Los Angeles who hooked them up with keyboardist Eric Ragno (ex Takara) and John Macaluso (Riot, Starbreaker, Malmsteen etc) on drums and they helped laying down all the tracks for the album. The album mix was taken care by Dennis Ward (PC 69) at his studios in Kalrsdorf, Germany.

“It was great to have Hugo singing and writing on this album” says Josh Ramos, “He did a great job, a lot of Journey fans are going to love it and also hear a side to Hugo’s singing that they haven’t heard before. Maybe we will be able to perform together at some point!”.

“The Dream” is a cracking Melodic Rock album, resembling Journey as primary influence, but also with elements of Two Fires and Valentine’s debut albums. One of the Melodic Rock highlights of the season and definitely and album to look out for.

Final tracklisting includes: (click song title for samples)
You’re Not Alone
All That I Wanted
The Dream
Fool’s Game
Bring Back This Love
I Don’t Wanna Say Goodbye
When You Get Lonely
In The City
Tomorrow
If I Can Take You