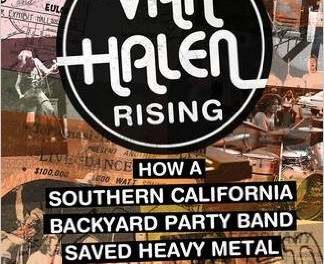 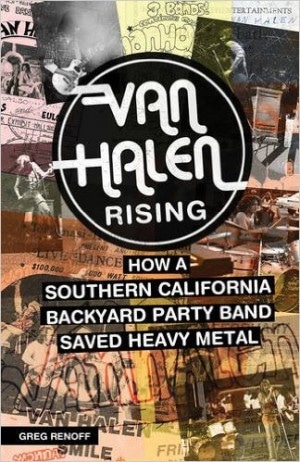 Amazon.com describes the book as follows:

“After years of playing gigs everywhere from suburban backyards to dive bars, Van Halen — led by frontman extraordinaire David Lee Roth and guitar virtuoso Edward Van Halen — had the songs, the swagger, and the talent to turn the rock world on its ear. The quartet’s classic 1978 debut, Van Halen, sold more than a million copies within months of release and rocketed the band to the stratosphere of rock success. On tour, Van Halen’s high-energy show wowed audiences and prompted headlining acts like Black Sabbath to concede that they’d been blown off the stage. By the year’s end, Van Halen had established themselves as superstars and reinvigorated heavy metal in the process.

Based on more than 230 original interviews — including with former Van Halen bassist Michael Anthony and power players like Pete Angelus, Marshall Berle, Donn Landee, Ted Templeman, and Neil Zlozower — Van Halen Rising reveals the untold story of how these rock legends made the unlikely journey from Pasadena, California, to the worldwide stage.”

Templeman was asked if he observed any friction between Michael Anthony and Eddie Van Halen, and whether Anthony played all his bass parts on the [early] Van Halen albums. Templeman replied, “Mike was a real solid great bass player and I never saw any friction ever, like ever ever. And Mike was so great. The thing that made Van Halen was his high voice… He was really on the money, played all the parts. There might have been something that went down after I left working with those guys… We worked out all of the arrangements in Dave‘s basement before we did anything else. We’d do that before we ever went into the studio. We’d take the lyrics to those songs, stick to another track. We played along with that stuff and Michael was essentially to all of it.” Templeman went on to state, “Without Dave, it would have never happened. It just — he was an amazing talent. He is an amazing talent. And then the brothers, especially Ed — one of the most talented people that I ever — he is the most talented person that I have ever worked with. And an amazing guy too, I’ll tell you that.”

Listen to VH show off their cover band chops this mega-rare, newly unearthed recording, live at Pasadena High School on April 25, 1975. For the untold story …