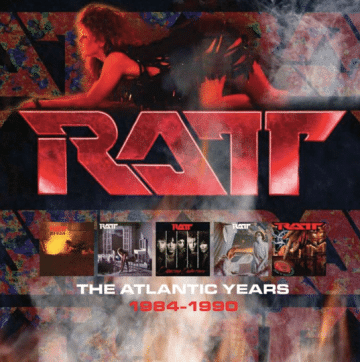 “Taking inspiration from Aerosmith and Van Halen, Ratt originally formed in Hollywood in the mid-1970s, eventually releasing the independent ‘Dr. Rock’ single in 1980, before contributing a track to the highly influential “Metal Massacre” compilation in 1981, and their independently released, self-titled mini-album in 1983. But Ratt finally made their mark when Stephen Pearcy (vocals), Robbin Crosby (guitar), Warren DeMartini (guitar), Juan Croucier (bass) and Bobby Blotzer (drums) signed to Atlantic Records in 1984 for the “Out Of The Cellar” LP. Their tuneful hard rock found favour with both radio and on MTV, where clips for singles ‘Round And Round’ and ‘Back For More’ received heavy rotation. A big influence on the growing glam and hair metal scene based around LA’s Sunset Strip, “Out of The Cellar” would soon reach triple platinum status. The radio edit of ‘Round And Round’ is included as a bonus track.”

Sleaze Roxx stated the following in its review of Out of The Cellar: “When I listen to the record, what comes up first and foremost are the amazing melodies, Ratt‘s ability to let the songs breathe due to Stephen Pearcy‘s slower and well paced vocal delivery, and some truly kick ass and memorable guitar solos from Warren DeMartini. To me, Ratt were one of the first bands to incorporate tons of melodies and catchiness without compromising on the heavier aspects of a hard rock / heavy metal band. Interestingly, I wouldn’t categorize Ratt as “hard rock” but also wouldn’t label them as “heavy metal.” They walked that fine line of being heavier and sleazier than hard rock but not heavy enough to be considered heavy metal.”

Sleaze Roxx concluded its review by stating: “Back in 2016 once again, Sleaze Roxx conducted an informal poll on what were the readers’ favourite Ratt albums and to no real surprise, Out of The Cellar took the top spot edging out the band’s follow up album Invasion of Your Privacy. I don’t think that you can call yourself an eighties hard rock / heavy metal connaisseur without Out of The Cellar in your collection. It continues to be one of my favourite albums of all-time and a groundbreaking album for the hair metal genre.”

Ratt‘s “Wanted Man” video (from Out of The Cellar album):