Stacey Blades, the former L.A. Guns guitarist and current member of Bobby Blotzer‘s Ratt, declared about a month and a half ago that he was back on the market for touring and recording in 2017. 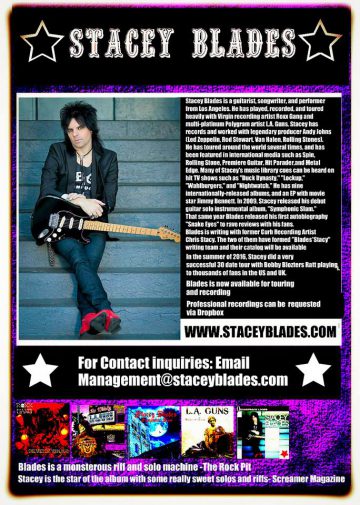 The following message was posted on Blades‘ Facebook page on May 16, 2017:

“Back on the market for touring and recording in 2017. I think my resume speaks for itself 😉 contact: management@staceyblades.com. Serious inquiries only please.
thank you and God bless”

This seems to confirm Sleaze Roxx‘s speculation that we may have seen the last of Blotzer‘s version of Ratt as two members of his last line-up for that band — singer Seann Nicols and now Blades — have seemingly moved on to other things at least in the short term.

Blades is also offering guitar lessons as the following was posted on his Facebook page on June 6, 2017:

“Guitar lovers and players now accepting beginner, intermediate and advanced students for online lessons with The Stacey Blades Rawk Academy. Take your playing to the next level with my 30 plus years of playing, songwriting, touring, recording albums for both bands and major television shows. PM or email management@staceyblades.com”

Wikipedia states in part the following about Blades:

“Stacey Blades (born Bryan Todd MaClachlan; November 4, 1968) is a guitarist originally from Toronto Canada, who has played with such bands as Fraidy Katt, Roxx Gang, Supercool, L.A. Guns, Let It Rawk, and Ratt. He has played on the L.A. Guns studio albums Rips the Covers Off, Tales from the Strip, Covered in Guns, and Hollywood Forever, and the L.A. Guns live album Loud and Dangerous: Live from Hollywood. He authored a book Confessions of a Replacement Rockstar in 2009.

At the end of 2012, Blades decided to leave L.A. Guns to pursue more personal opportunities for performing and songwriting. He worked with Sony Music designing and writing guitar loop packages. Blades was also the last artist to work with the legendary producer Andy Johns before his untimely death in April 2013.”

Blades has recently released two songs, which seem to have a more country feel to them.

Blades Stacy‘s “Safe With Me” song:

Safe With Me: Blades Stacy

Safe With Me.Copyright 2017 ASCAP/BMIWritten and Performed by Stacey Blades and Chris Stacy.Engineered By Oz Fox.Produced by Oz Fox and Stacey Blades.

Blades Stacy‘s “The Trouble With Her Is” song:

Blades Stacy The Trouble With Her Is