Bobby Blotzer‘s version of Ratt played at the First Council Casino in Newkirk, Oklahoma, USA on July 30, 2016 and Blotzer reportedly fell off a riser sustaining some undisclosed injuries in the process. 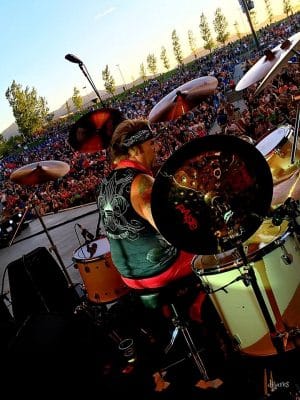 also reported that Ratt walked off the stage after only three songs due to technical / sound difficulties.

Ratt did come back on stage to complete their set as reported on the band’s Facebook page, which states:

“A message from Bobby Blotzer…
Quick explanation of the stage exit last night in Oklahoma.
Well, I’ve never been in such a position that it was virtually impossible to play the songs.
We had incredible problems with the sound on stage. And I mean disasteriously bad.
My kit also was in disarray from its locked in set up and after 3 tunes in to it, just wasn’t fair in my evaluation to the audience to continue until it was rectified.
The injuries I got falling off the riser, that was road wear, a bit on a higher scale, but thank God I fell in to a stack of Marshall amps.
The show did complete and the sound was radically adjusted and on we went.
Very stressful and endangering to my hearing and what’s left , when it sounds like a train smashing off a train track, somethings gotta happen and quick.
Onward ho, RATT N Roll!!
BB“