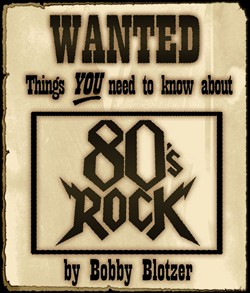 This new informational book “series” will give the publishing industry a kick in the ass by inviting the world to participate in the first, as far as we know, “User Interactive” book.

Volume one, of the series will be a follow up to Bobby’s greatly received autobiography, “Tales Of A RATT, Things You Shouldn’t know” (Still available on www.Amazon.com, www.BobbyBlotzer.com and www.Kindle.com). This first volume will have you the fan’s, asking the questions, about things, YOU NEED TO KNOW!

Any subject on anything and everything rock, Ratt, music and music business related. Touring, recording, studios, backstage, hotels, record deals, record producing, publishing deals, etc. Anything goes, nothing is off limits.

“I got the idea for the series in thinking, wouldn’t it be nice to approach the author of any given book that always has one or two unanswered questions? I want to gather not only the questions, but also have the person posing the question be in the book itself. Including your name, where you’re from, and a picture of you next to your questions. How fun right?”, says Blotzer.

The “Wanted” series will start with 80s Rock with Bobby Blotzer doing the Q&A. Shortly thereafter the series will expand into different industries regarding all subjects and people like you, asking the questions that we all NEED to know. This first book will be arriving in Spring 2011!

Also coming soon, Bobby Blotzer’s new wine franchise, Ratt N Roll / Out Of The Cellar featuring a fine selection of your favorite red and white wines. Much more to be announced soon.