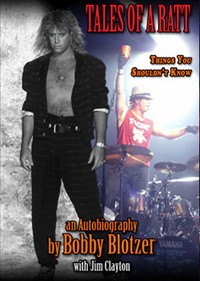 Ratt drummer Bobby Blotzer’s autobiography ‘Tales Of A Ratt’ is set to be released on April 20th, the same day as Ratt’s new CD ‘Infestation’. The new book can be pre-ordered at www.bobbyblotzer.com.

Tales Of A RATT traces the history of Bobby Blotzer’s personal journey of becoming an 80s rock legend while taking the reader through a conversational blow-by-blow of what it was like to manage fame, fortune, and the realities of an era’s end and rebirth. Packed with personal friends who make up nearly all the famous bands of the 80s, this book is the backstage story that all fans of 80s rock have always longed to hear, but have never heard.

Tales Of A RATT is a diversion from the depressing heroin laced near death books that dare to paint a positive era of Rock N’ Roll as anything but exhilaratingly unique. The positive memories that make up the emotional portfolio of nearly all 80s fans is kept alive as Bobby progresses step by step through the lives of not only his band RATT, but the rise of so many others that have become household names.

Tales Of A RATT focuses on the fans that experienced the 80s first hand, and the resurgence of 80s rock in the record industry today. As new fans look for books to trace the history of 80s rock and as loyal fans of 80s legends look to complete their collections of their rock heroes, Tales Of A RATT delivers the untold stories of how they hung out, how they partied, and how they made it through the 90s to emerge a top billing genre in the 21st century.

Some of the legends in Tales Of A RATT include:

Earlier today Ratt released the first video from ‘Infestation’ for the song “Best Of Me”.